Video of Humpback Whales Swimming at Bombay High Sends Netizens into Frenzy, Is The Clip True or Fake?

A video of three whales swimming in blue waters has been shared online and netizens claim they were spotted at an offshore oilfield located in the Arabian Sea. While the source of the video is unverified, the video has sure caused a frenzy among people on the internet. 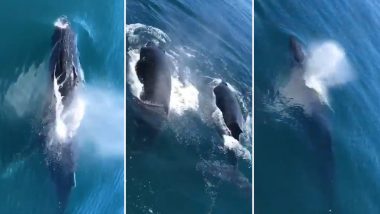 If there is one positive news coming out of the Coronavirus lockdown it is the animals and birds frequenting near the city areas. After dolphins were spotted along the Marine Drive a few days ago, pictures of peacocks in South Mumbai's Parsi Colony. And now there are claims that whales/ sharks at the Bombay High which is about 160 kms from the Mumbai sea coast! A video of three humpback whales swimming in blue waters has been shared online and netizens claim they were spotted at an offshore oilfield located in the Arabian Sea. While the source of the video is unverified, the video has sure caused a frenzy among people on the internet, some jokingly calling it a dinosaur! Although now it has come up, that the video is could be fake as there are no cameras allowed in the region. Fact Check: Deer Spotted Playing on Chandrabhaga Beach or Konark Puri Marine Drive in Odisha Amid Lockdown? Know Truth About This Viral Video.

Not just in Mumbai or India alone, we have seen reports of animals and birds roaming around freely, as humans continue to stay indoors because of the Coronavirus quarantine. Dolphins and swans were spotted freely swimming in Italy's waters. Now a video has been shared on Twitter and WhatsApp about whales being spotted off the Mumbai coast. The video of whales is said to be from Bombay High (now Mumbai High), an oilfield located in the Arabian Sea. The sight has definitely exciting for the netizens. But we still do not know the authenticity of the video. A correspondent with HT, tweeted a statement from the ONGC which mentions that it is a fake claim as no cameras are allowed in the oilfield.

Surprise, surprise! Keep watching this video shared by a friend sourced from someone who works at Bombay High, some 161 km from the Mumbai coast. Btw...listen carefully...did someone just say 'dinosaur' 😄 pic.twitter.com/lrzQvGSNI2

Bombay High is situated some 161 km north of Mumbai coast.

Few years back, Lot of shark whales and many dolphins were spotted in the vicinity of Bombay High.

So while they accepted that marine life is thriving, the said the video is not from ONGC for sure. The same video has been shared by numerous people and they are marvelling at the beauty of these giant mammals. The video has someone joking it's a dinosaur, but fun aside, some identified them as humpback whales. Many are saying how mother nature is giving signs over and over again. The reports are truly heartwarming for a nature lover,  but it is important to confirm the source of them all.

(The above story first appeared on LatestLY on Apr 05, 2020 12:11 PM IST. For more news and updates on politics, world, sports, entertainment and lifestyle, log on to our website latestly.com).