If Dinosaurs Wore Tie, Will It Go on Top or Bottom of Its Long Neck? Twitter Users Puzzled Over the ‘Serious Debate’ After Bizarre Pic Goes Viral (Check Hilarious Reactions)

The pic holds the age-old debate, if dinosaurs wore a tie, how would it carry the look? Will the tie go on top or bottom of its long neck? Twitter users are puzzled over the “serious debate,” after the bizarre picture has gone viral. 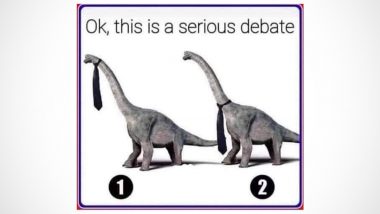 Do you want to giggle like a Giganotosaurus? Well, here is a super fun picture that is tickling the funny bones of netizens, while also confusing some of them, with a very old debate. Dinosaurs have been extinct for tens of millions of years now. But that does not mean we cannot bring them back in the present times! The reptiles are a perfect subject for the internet’s preferred form of humour, satire and sarcasm, majorly memes! So, when a Twitter user shared a pic of dinosaurs, it was bound to go viral. The pic holds the age-old debate, if dinosaurs wore a tie, how would it carry the look? Will the tie go on top or bottom of its long neck? Twitter users are puzzled over the “serious debate,” after the bizarre picture has gone viral. While some had hilarious reactions to give, others got their fact straight; as for the rest, they resorted to more puzzling questions!

Twitter user @vissersixxx shared a pic that contains two dinosaurs, seemingly wearing a necktie. But the “serious debate,” is if they wore a tie, will it go on top of their neck, or at the bottom—with two options representing the look! The viral tweet is an instant hit on social media. At the time of writing this, the tweet received more than 75k likes, over 10k retweets and thousands of comments—the counts are only increasing.

While some chose option two, keeping their facts straight, others went for option one. Again, a few Twitter user tried to find the ‘correct’ answer by referring to the famous 90s sitcom, Dinosaurs. But the rest had more puzzling situations!

They Say Option 'A'

In Pittsburgh, we have a scarf wearing dinosaur. It is at the world famous Carnegie Museum, home of a renowned paleontology department. They say A. So, I say A. pic.twitter.com/ylglp5IQmf

Ties Go At the Bottom of Neck?

2! Ties go at the bottom of the neck, not the top.

I think we can learn a lot about this from the dashing horse. The tie is at the bottom of the neck pic.twitter.com/KUxpIF69hR

If This Would Help!

You know I was very ready to say 2 based on aesthetics, but after doing some research and seeing where this character from the '90s show 'Dinosaurs' where's their necklace and ascot, I'm not so sure. pic.twitter.com/aYWDStvkt1

Others Had More Puzzle Questions

Reminds me of the age old question: pic.twitter.com/0geWSI9VxK

Which option would you pick? Whatever your answer is, know that it is hypothetical, and hence, there cannot really be a correct answer! Unless there is any expert opinion, you can pick, whichever option you feel is rational.

(The above story first appeared on LatestLY on Feb 27, 2021 04:20 PM IST. For more news and updates on politics, world, sports, entertainment and lifestyle, log on to our website latestly.com).