IAS officer Sanjay Kumar, who has written seven books on birds of different cities, said that the diversity and density of birds, especially in an urban landscape, decide how much a place is environmentally intact. 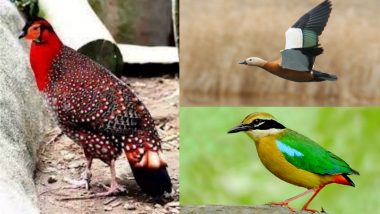 Lucknow, Dec 20: With winter now peaking, several rare migratory birds have been spotted in Lucknow this season. While the sunbird is found all over Lucknow, bird watchers say that Indian pitta (also called 'Navrang' for nine colours in its plumage), migratory duck coming from trans-Himalayan region ruddy shelduck (surkhaab), black hooded oriole (beautiful endemic bird) and the migratory bird from northern Siberia -- northern pintail (seekpar) are some of the other rare birds that have been spotted.

According to former director of Bombay Natural History Society and an avid bird watcher Asad R Rehmani, "Lucknow has many hamlets preferred by birds which are the most important indicators of the health of an ecosystem. They play an important role in stabilising nature's health. They are known as the bio indicator of the environmental system." Wonderful Pics of Migratory Birds to Marvel At!

IAS officer Sanjay Kumar, who has written seven books on birds of different cities, said that diversity and density of birds, especially in urban landscape, decide how much a place is environmentally intact.

With winter now peaking, several rare migratory birds have been spotted in #Lucknow this season.

Kumar, along with Neeraj Srivastava, has authored a book called 'Birds of Lucknow', which is a visual document of over 250 kinds of birds found in the city.

"Birds are an integral part of life. They give us a chance to respect nature which reciprocates the love several times," said Srivastava.

A group of about 200 bird watchers in Lucknow find the Kukrail forest to be among the most preferred destinations for bird watching while IIM-Lucknow campus, Sanjay Gandhi Postgraduate Institute of Medical Sciences (SGPGIMS) campus, National Botanical Research Institute, Remote Sensing Applications Centre, Residency complex, Cantonment and wetland around Lucknow are other destinations for winged visitors.

(The above story first appeared on LatestLY on Dec 22, 2021 02:50 PM IST. For more news and updates on politics, world, sports, entertainment and lifestyle, log on to our website latestly.com).