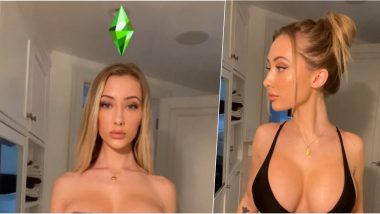 The 20-year-old claimed she had raised more than AUD$500,000 for Australian bushfire charity. Kaylen did by sending nude photos and selfies to people who would donate for this good cause. Sadly, all of this came at a price for the Instagram model as her family disowned her following this step. However, Kaylen did not regret her call one bit. Sadly, her big-heartedness failed to sync in with Instagram's strict no-naked policy leading to Kaylen Ward's Instagram account getting deactivated. She first notified of her Instagram accounts getting deactivated by tweeting from her handle @TheNakedPhilonthropist, "My IG got deactivated, my family disowned me, and the guy I like won't talk to all because of that tweet but f*** it, save the koalas." Now according to Instagram's Community Guidelines page, sharing photos, videos and digitally-created content that depict genitals, close-ups of fully-nude butt, sexual intercourse which can get your account shut down. However, there are several examples in the past that makes Instagram's policy debatable.

Now, while Kaylen Ward's Instagram accounts (twice) has been flagged and pulled down, there are several fake profiles with her name that has sporadically popped up on the platform. Kaylen, who earlier clearly stated in a tweet of having no verified Instagram account has now updated her fans of having a real account. Kaylen writes, "My only real Instagram at the moment is http://Instagram.com/kaylenschaleenward…everything else is a fraud. (now-deleted tweet)." She had previously posted a snapshot of reportedly fake accounts. Interestingly, Kaylen Ward does not have verified Twitter account as well.

The island continent-nation is witnessing horrific destruction with every passing day. From flora and fauna to humanity, everything has taken a hit. We come across distressing pictures and videos of koalas, kangaroos and other wildlife animals striving hard to survive the worst. In most cases, they have not made out alive, and it is making everyone's skin crawl. And in this time of distress, everyone is joining hands to combat Australian bushfire. From public figures like tennis players Maria Sharapova, Nick Kyrgios, Novak Djokovic and others to common people, everyone is trying their help Australia. Model Kaylen Ward aka The Naked Philanthropist's method may seem odd, but one should not question her intentions.

(The above story first appeared on LatestLY on Jan 06, 2020 01:24 PM IST. For more news and updates on politics, world, sports, entertainment and lifestyle, log on to our website latestly.com).