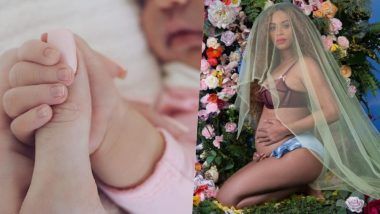 Kylie Jenner’s baby girl Stormi has taken Instagram by storm. Born on February 1, 2018, to Kylie and her rapper boyfriend Travis Scott, Stormi Webster is living up to her name. The TV personality and beauty mogul posted a picture of her newborn daughter to make the name announcement on February 6. This post of Kylie Jenner has gone on to become the most-liked picture on Instagram. With 14.6 million likes, it has surpassed Real Madrid footballer Cristiano Ronaldo and American singer-songwriter Beyonce’s uploads which are now pushed to the second and third place in the list of top 10 most-liked Instagram posts.

The youngest sister of Kardashian-Jenner family, Kylie after keeping her pregnancy a secret finally revealed about the child on February 4. Her lengthy note on pregnancy announcement also received 10.3 million likes to take fifth place in the most-liked Instagram pictures. The 20-year-old wrote a heartfelt post exclaiming the reason behind being extra secretive about her pregnancy, embracing motherhood and her love for the father of her child, Travis.

Kylie Jenner's second post of the week shattered all records as she shared the first glimpse of her little angel. The picture showed her daughter holding her finger. The new mum captioned it as 'Stormi Webster' followed by an angel emoji. The name choice has got everyone talking as she did not use Jenner or Scott as the surname but Webster, which is kept on Travis Scott's real name Jacques Webster.

Kylie Jenner's full pregnancy announcement read, “I’m sorry for keeping you in the dark through all the assumptions. I understand you’re used to me bringing you along on all my journeys. my pregnancy was one I chose to do in front of the world. I knew for myself I needed to prepare for this role of a lifetime in the most positive, stress-free, and healthy way I knew how. There was no gotcha moment, no big paid reveal I had planned. I knew my baby would feel every stress and every emotion so I chose to do it this way for my little life and our happiness.”

“Pregnancy has been the most beautiful, empowering, and life-changing experience I’ve had in my entire life and I’m actually going to miss it,” she continued. “I appreciate my friends and especially my family for helping me make this special moment as private as we could. my beautiful and healthy baby girl arrived February 1st and I just couldn’t wait to share this blessing. I’ve never felt love and happiness like this I could burst! Thank you for understanding.”

After a look at the top posts on Instagram, one can understand that pregnancy announcements or baby picture posts receive most love from the fans and followers. Be it Kylie, Cristiano or Beyonce, fans flooded them with much love when they made baby announcements. The only standout posts have come from singer Selena Gomez who features twice in the top-ten list and has nothing to do with pregnancy! Those occasions included her revelation about getting a kidney transplant thanks to her best friend and other time when she was visiting her childhood home. Selena's on and off boyfriend and pop singer, Justin Bieber takes the ninth spot when he flaunted his tattoo while footballer Ronaldo completes the tenth position with his post after winning the 5th Ballon d'Or award.

(The above story first appeared on LatestLY on Feb 08, 2018 04:28 PM IST. For more news and updates on politics, world, sports, entertainment and lifestyle, log on to our website latestly.com).