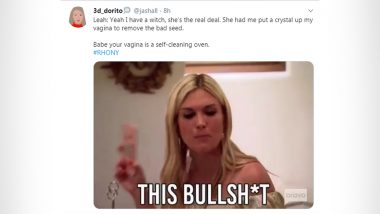 Will there come a time when people stop talking about shoving strange things inside the vagina to "cleanse" it? Maybe. But now is not that time. Just recently, Leah McSweeney revealed on the latest episode of "Real Housewives of New York City", that she put a crystal egg inside her vagina, as recommended by a witch from Brooklyn to get over her ex-boyfriend. Yes, while the ladies were in Mexico Leah shared a story based about getting over her ex.

She revealed how she was left heartbroken and soon decided to see a witch in hope to help her deal with it. The witch she went to see revealed that her ex's bad energy was left in her vagina. She moved on to give Leah a crystal egg to put inside her. She revealed that the egg will help her cleanse herself off the bad energy left by her ex.

What Leah said left everyone in shock and amused. Ramona and Dorinda were speechless and Sonja seemed very keen to meet the witch and get some cleansing rituals herself. As soon as this went out fans felt shocked and amused too and Leah's crystal egg story has become a social media chatter. Check Tweets:

Leah: Yeah I have a witch, she’s the real deal. She had me put a crystal up my vagina to remove the bad seed.

lolol... wait, WHAT Leah? your ex bf’s negative energy is in your WHAT? And a witch gave you an egg to put inside you to rid your body of his energy? yeaaa.... #RHONY #RHONYC— The Styled Stories (@styledstories) August 14, 2020

Omg Leah talking about sticking a crystal up her vagina bc a witch told her there was still bad energy from her ex up in there. I can’t 😂 #RHONY— Amelia Baymer (@AmeliaTheGingey) August 14, 2020

A fan tweeted, "Lolol... wait, WHAT Leah? your ex bf’s negative energy is in your WHAT? And a witch gave you an egg to put inside you to rid your body of his energy? yeaaa.... #RHONY #RHONYC." Another fans said: "Another fan commented, "Ramona Singer reacting to Leah McSweeney talking about how a Puerto Rican witch from Brooklyn helped rid her of the bad energy she had locked in her vagina from a toxic ex-boyfriend: a series. #RHONY."

(The above story first appeared on LatestLY on Aug 14, 2020 04:24 PM IST. For more news and updates on politics, world, sports, entertainment and lifestyle, log on to our website latestly.com).