Worrying that the puppy may find it difficult to survive in the wilderness, she decided to carry the animal with her. 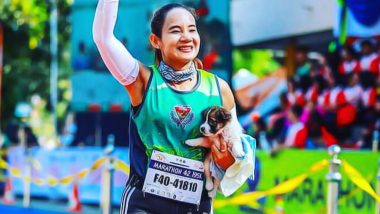 Khemjira Klongsanun was running a marathon in Ratchaburi, western Thailand when she found a puppy in the race track. The 43-year-old was yet to finish 19 miles (30 km) in the 26-mile (41 km) race when she spotted the little Thai bangkaew breed dog shivering in the cold. She had seen other athletes pass by the puppy and when she reached the spot she slowed down.

Khemjira bent on her kneel and gently patted the animal and checked if the dog was fine. With no houses around, she understood that the puppy was lost in the middle of nowhere. Worrying that the puppy may find it difficult to survive in the wilderness, she decided to carry the animal with her. Khemjira ran the rest of the 19 miles with the puppy in her arm. Following the marathon, video and pictures of the woman running carrying a puppy in her hand have gone viral on social media. Her kind action was praised by spectators and fellow runners. Stray Dogs in Chennai Walked the Ramp For an Adoption Drive, View Cute Pics From The Great Indian Dog Show!

As onlookers cheered, she raised the puppy in hand smilingly:

Khemjira who is a shop owner has adopted the dog and named it Chombueng. She is ready to give it to the right owner, but nobody has yet come forward. Khemjira believes Chombueng is two-month-old. Chombueng already has two grown-up dogs at home. Golden Retriever as Mayor! Californian Town Elected a Dog, View Cute Pics of Max.

Daily Mail quoted Khemjira as saying, "Running almost 20 miles carrying dog was truly a challenge. It was two times tiring than a normal marathon but I did it anyway just because he is adorable. It took a lot of time to take the new dog for checkups, vaccinations, and treatments but I'm glad to save him and willing to have him with other dog members in the family. It might take a while for him to adapt himself. But Chombueng is a very smart boy. I'm sure he is going to be happy living with us."

(The above story first appeared on LatestLY on Jan 30, 2019 01:22 PM IST. For more news and updates on politics, world, sports, entertainment and lifestyle, log on to our website latestly.com).