While Twitter CEO Dorsey gave a clarification, that although the platform is not "arbiter of truth" and it would still work on eradicating fake news, Facebook CEO Mark Zuckerberg believes otherwise. A satire article reporting his death is going viral. The headline reads, "Mark Zuckerberg – Dead At 36 – Says Social Media Sites Should Not Fact Check Posts." 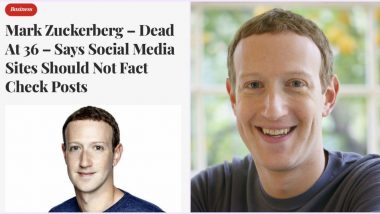 If you read a story about Mark Zuckerburg's death, you are likely to dismiss it off as fake news or go check up the details of the same. But some would believe what they see and that's how fake news starts spreading. After Donald Trump's tweet on mail in-voting was fact-checked by Twitter it started a row on policing online content. While Twitter CEO Dorsey gave a clarification, that although the platform is not "arbiter of truth" and it would still work on eradicating fake news, Facebook CEO Mark Zuckerberg believes otherwise. After he made a remark "that Facebook or internet platforms, in general, should be arbiters of truth," a satire article reporting his death is going viral. The headline reads, "Mark Zuckerberg – Dead At 36 – Says Social Media Sites Should Not Fact Check Posts." The site takes a clear dig at Zuckerberg for his stance and netizens are loving it. Donald Trump Threatens to Shut Down Social Media Companies After Twitter Adds Label on His Tweets.

An article has been posted on The Shovel which reports about the Facebook CEO's death. In the report, it goes on to mention Zuckerberg died after he tested positive of COVID-19  last week. The purely satirical article goes on to state that the funeral would be held next week and tributes are flowing in from him from all over the world. Netizens are impressed by this article and the headline in general which stresses no fact-checking on social media.

Check Tweets About This Piece of Satire:

Headline of the Day

Headline of the day. pic.twitter.com/AaWmQoZvFa

How about an obit to go with it

This is How You Do It

Sorry, I just have to link the actual article in LRT as well - it's too good not to share 🤣 THIS is how you do satirical news! https://t.co/UQIXnegYkv

For those who are unaware, Zuckerberg said, "I just believe strongly that Facebook should not be the arbiter of truth of everything that people say online. Private companies probably shouldn’t be, especially these platform companies, shouldn’t be in the position of doing that." Meanwhile, Twitter flagged another tweet by the US President for glorifying violence amidst the row.

Social media sites like Facebook, Twitter or even instant messaging application WhatsApp can rapidly spread fake news over a click of a button. It thus becomes a responsibility of every network to have strict controls over what is being posted and shared online. At a time, when the world is caught in a pandemic, there are several fake reports about coronavirus among other things, that are spread online to create more panic. So it becomes important to regulate the kind of fake reportage that goes on here.

(The above story first appeared on LatestLY on May 29, 2020 04:32 PM IST. For more news and updates on politics, world, sports, entertainment and lifestyle, log on to our website latestly.com).