Mika Singh Tags Karan Johar Instead of Karan Singh Grover in his Promotional Tweet for Dangerous, Corrects His Mistake Later 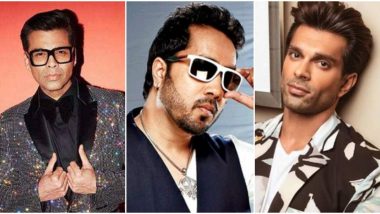 Remember how Vidyut Jammwal had recently tagged Amit Shah instead of Amit Sadh in his recent tweet for Yaara promotions? Yes, the actor had even rectified his mistake later on. Guess, the same incident and confusion were repeated once again, this time between Karan Johar and Karan Singh Grover. Popular singer Mika Singh took to his Twitter account to send his love and shower his praises for his 'Dangerous' stars, Bipasha Basu and Karan Singh Grover. The only difference was that he tagged Mr Johar instead. Dangerous Trailer: Bipasha Basu and Karan Singh Grover Team Up for an Edgy Thriller (Watch Video).

"Guys they are back together after 5 years... both are looking so beautiful @bipsluvurself and @karanjohar," he had tweeted to promote his debut production, Dangerous. Twitterati was quick in noticing his mistake and they even made him aware of his big goof up. The singer later rectified his mistake by tweeting, "So sorry spelling mistake... @bipsluvurself and@Iamksgofficial." Of course, the mistake wasn't intentional on his part and such errors are very common on social media. Mika Singh: 'Sonu Nigam Ji and Bhushan Kumar Are Like Husband and Wife, When They Fight, Let Them Be'.

Guys they are back together after 5 years... both are looking so beautiful @bipsluvurself and @karanjohar ... https://t.co/FSksapjEv1

And the Corrected One

Dangerous is an upcoming web series produced by Mika Singh for MX Player. The series also marks real-life couple, KSG and Bipasha's reunion for a project after a gap of five long years, their last being Alone in 2015. While its trailer was quite intriguing, here's hoping it garners good reactions. Dangerous is slated for August 14, 2020 release.

(The above story first appeared on LatestLY on Aug 10, 2020 11:31 PM IST. For more news and updates on politics, world, sports, entertainment and lifestyle, log on to our website latestly.com).