Bipasha had also teased the project Wednesday when she shared a picture with Karan and wrote, “Our #Dangerous jodi is going to heat up your screen tomorrow. Watch out!” 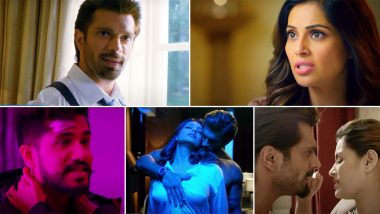 Bipasha Basu and husband Karan Singh Grover have now teamed up for a web project and we bet you can't wait to see the duo together. As promised earlier by them about a surprise announcement, the trailer of their upcoming project Dangerous, has now been released. The real-life couple is all set to set the screen on fire after a while and were last seen together five years ago in the horror drama Alone. Their upcoming thriller, Dangerous is all set to drop on MX Exclusive. Bipasha had also teased the project Wednesday when she shared a picture with Karan and wrote, “Our #Dangerous jodi is going to heat up your screen tomorrow. Watch out!”Bipasha Basu Reveals Karan Singh Grover Crashed Her Bachelorette Party, Shares a Picture Kissing Her Husband.

Sharing the trailer of the film on Friday, August 6, she wrote, "A troubled husband looking for his missing wife. Will he find her or will we uncover some #Dangerous hidden secrets? Find out on 14th August only on @mxplayer." The interesting trailer showcases Bipasha in a glamorous avatar and revolves around Karan's character of a young businessman whose wife gets kidnapped. Things take a complicated turn when his former lover, Neha (Bipasha ) is sent to handle the case.

Check Out the Trailer of Dangerous Here:

The trailer suggests that the show will be full of twists and secrets that will be uncovered with every episode. There's no doubt that Karan and Bipasha look absolutely stunning and will keep you hooked to this show. Bipasha Basu’s Salty Hair, Coconut Oil, Big Waves, Hot Sun All Express a Tropical State of Mind!

Fans are excited for this project considering it's been a while since we saw Bipasha Basu on-screen. Karan was recently seen in Kasautii Zindagii Kay where he played the popular role of Mr Bajaj. Dangerous has been directed by Bhushan Patel and is all set to stream on August 14.

(The above story first appeared on LatestLY on Aug 06, 2020 04:16 PM IST. For more news and updates on politics, world, sports, entertainment and lifestyle, log on to our website latestly.com).