Rasika Dugal Opens Up on Bagging Two Nominations at the Indian Film Festival of Melbourne!

Rasika Dugal has been honoured with a nomination under the category 'Best Actress' for her film Lootcase. She has also been nominated for 'Best Performance (Female) - Series' for Mirzapur 2. 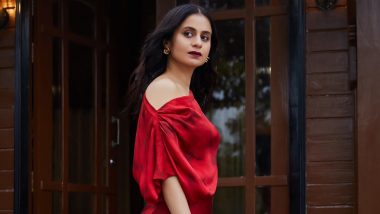 Actress Rasika Dugal, who bagged two nominations for her work in the film Lootcase and web series Mirzapur 2 at the Indian Film Festival of Melbourne (IFFM), says she is very excited and happy about the nominations and how she wishes to travel and attend the festival.  Out Of Love Season 2 Review: Rasika Dugal And Purab Kohli's Drama Gets Edgier With A Change In Pace (LatestLY Exclusive).

Rasika said, "I am thrilled to be honoured with two nominations for Best Actress at the Indian Film Festival of Melbourne - one for a film and one for a series. It is an honour to have my work noticed by a discerning jury and to be nominated alongside some of the most talented actors of our country - actors who raise the bar with each project that they do. Also, Melbourne is one of my favourite cities in the world and I have heard so much about this beautiful festival. I would have loved to attend the festival in person.....in better times!" Rasika Dugal Asks Fans to ‘Hang In There’ in This Tough Time of COVID-19 Lockdown.

Dugal has been honoured with a nomination under the category 'Best Actress' for her film Lootcase. Vidya Balan, Swastika Mukherjee, Kani Kusruti, and Rima Kallingal are the actors who share the honour with her. She has also been nominated for 'Best Performance (Female) - Series' for Mirzapur' Season 2 along with Neena Gupta, Prajakta Koli, Samantha Akkineni, Shahana Goswami and Shweta Tripathi Sharma.

(The above story first appeared on LatestLY on Aug 07, 2021 05:49 PM IST. For more news and updates on politics, world, sports, entertainment and lifestyle, log on to our website latestly.com).