Rasika Dugal Birthday: From Hamid To Manto, Naming Some Of Her Best Performances

A delight for any director, Rasika Dugal's acting abilities only enhance with all her outings. As she gets ready to ring in her birthday, we take a look at some of her best performances to date. 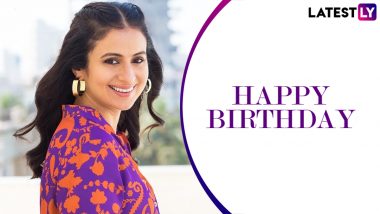 Rasika Dugal celebrates her birthday today. Known for being an actress and not a 'heroine', her name is a guarantee in itself. Guarantee that her outing would be worth all your time and that she won't disappoint with her performance. A terrific actress who performs with all her heart, she's a genuine performer and sheer magic on-screen. A delight for any director, Rasika's acting abilities only enhance with all her outings. As she gets ready to ring in her birthday, we take a look at some of her best performances to date. Rasika Dugal Is Acing Those Neo Ethnic Vibes With Brilliant Blue Bandhej and Checks!

Join us while we admire her talent!

While Nawazuddin Siddiqui's performance was hailed by critics and viewers alike, Rasika was equally a delight. She was able to match Nawaz's acting proficiency and stand tall beside a performer that he is.

Hamid was praised for its beautiful storyline. While the movie wasn't essentially a political take on the issue of Kashmir and Kashmiris, it highlighted their concerns nonetheless. Rasika's acting talent was highlighted in Aijaz Khan directorial and she justified the role that was offered to her.

Who doesn't love Mirzapur and its characters? From Ali Fazal to Pankaj Tripathi and Divyendu Sharma, the show blessed us with so many iconic characters and Rasika was definitely one among them. She was able to light up the scenes with her presence and emerge as a strong actor towards the end. Rasika Dugal Has That Candy Striped Summertime Chicness Working Perfectly for E-Promotions of Mirzapur 2!

Now the Emmy Winning series, Delhi Crime was based on the brutal gangrape case of 2012 in Delhi. While Shefali Shah was the lead, Rasika Dugal played an IPS trainee. Her performance was genuine and worth all the applause.

Directed by Mira Nair, A Suitable Boy had an amazing star cast but trust Rasika to shine the brightest. She won our hearts with her acting capabilities and made us root for her harder.

Rasika's just getting started in the industry and has miles more to go. We hope the actress continues to boggle our minds with her talent in future and that she announces her next venture very soon. Here's raising a toast to the brilliant actress that she is. Happy Birthday, Rasika! Keep shining.

(The above story first appeared on LatestLY on Jan 17, 2021 09:00 AM IST. For more news and updates on politics, world, sports, entertainment and lifestyle, log on to our website latestly.com).