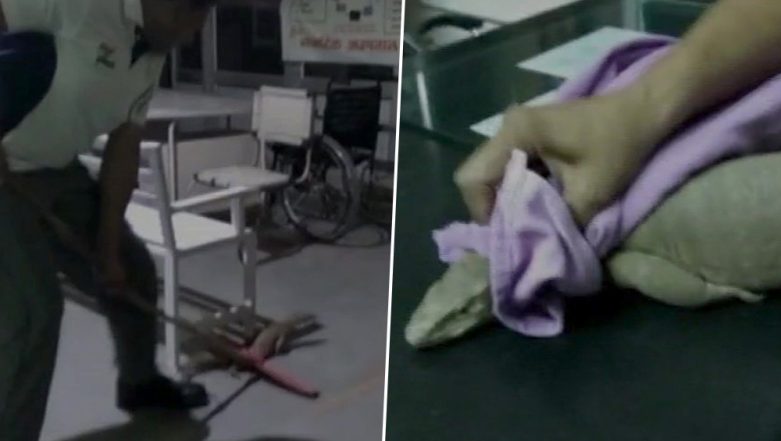 A hospital is the last place where one would want to come across a big reptile. But in Haryana's Fatehabad region, a 3-feet-long monitor lizard was captured from a government hospital on Monday, June 24. The big reptile was captured and will be let out in the wild. The monitor lizard was found in Emergency Ward of the hospital. Pictures of the captured reptile were shared online. Woman Calls Firefighters to Rescue 'Huge Monitor Lizard,' Turns Out To Be a Small Gecko, View Pic!

Monitor lizards are large lizards native to  Africa, Asia, and Oceania. They have long necks, powerful tails and claws, and well-developed limbs. An adult species can range from 20 cms to over 3 metres. They are mostly carnivorous and eat eggs, smaller reptiles, fish, birds and other small mammals. Depending on the region they live in, some also eat fruits and vegetables. While their bites are not fatal to humans, they can cause tremendous pain.

Check Pics of the Monitor Lizard Found at a Hospital in Haryana:

Fatehabad: A 3-feet-long Monitor lizard was found in Emergency Ward of Government Hospital in Tohana yesterday; it has been captured & will be released into the wild. #Haryana pic.twitter.com/3zEsk72k9U

This is not the first time a monitor lizard has been found in local premises. Last year, a huge monitor lizard was seen inside a girl's hostel in Netaji Subhas Institute of Technology (NSIT) in Delhi. The lizard said to have come as a result of a stormy night. The photo of the giant lizard was shared on Facebook by some students.

The largest species of these reptiles are Varanus komodoensis more commonly known as Komodo Dragons which are found in some Indonesian islands.