Monkey Day 2019: Top 15 Fun And Interesting Facts About Monkeys That Will Blow Your Mind Away 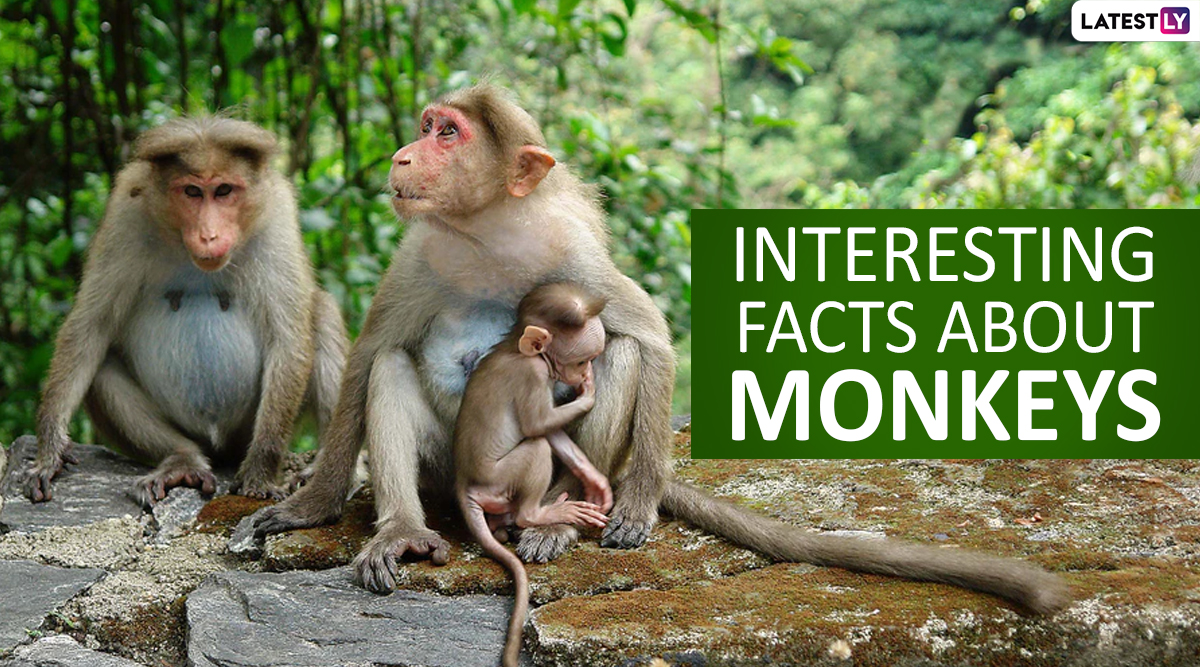 Monkey Day is observed on December 4 annually to celebrate celebrates and all similar things. The day was started by artists Casey Sorrow and Eric Milikin who were art students at Michigan State University. The day celebrates non-human primates like apes, lemurs, trasers and other similar animals. It is also known as International Monkey Day and World Monkey Day. As we observe Monkey day, we bring some interesting facts about monkeys. While humans are often compared to monkeys jokingly and theoretically, they do share similarities. On International Monkey Day 2019 here are some fun facts about the animal species. Monkeys Are Feeding on Rats in Malaysia! Scientist Shocked But Call Them 'Effective Pest Control'.

Monkeys are present all over the world and appear in various shapes and sizes. Considered as the closest relatives of humans, these mammals are quite intelligent and are known for their deep understanding of things. They generally feed on foods such as fruit, insects, flowers and leaves. Some also eat bird's eggs, small lizards and spiders. Mother Monkey Saves Her Baby Stuck in Narrow Slot, Viral Video Will Touch Your Heart.

1. There are more than 260 different types of monkeys and are separated into two major categories including New World and Old World. The New World monkeys live in the Americas, while Old World monkeys are the ones found in Asia and Africa.

3. Most of the monkeys live on trees except a few who seem to prefer the ground like baboons.

4. Howler monkeys live in groups known as troops and only one male monkey is known to howl in the morning.

5. Capuchin monkeys are believed to be one of the smartest New World monkey species. They have the ability to use tools, learn new skills and show signs of self-awareness.

6. Mandrill is the largest type of monkey with adult males weighing up to 35 kg.

7. Spider monkeys get their name because of their long arms, legs and tail.

8. According to the University of Wisconsin, the world's smallest monkey is the pygmy marmoset. It weighs around 113 grams and is only around 12.7 cms tall.

9. The monkey is the ninth animal that appears on the Chinese zodiac and appears as the zodiac sign in 2016.

10. Head bobbing, grinning, pulling the lip and yawning are considered to be some signs of aggression in monkeys.

11. A Colombian woman claimed that she was raised by a colony of capuchin monkeys when she was just four years old. She says they adopted her after she was kidnapped and abandoned in the jungle.

13. Certain Red Colobus species and the Olive Colobus monkey are hunted by humans and chimpanzees for food.

15. Monkey 'IQ test' have hinted at intelligent human ancestors. They have an IQ of 174.

Brazil has the most number of primates than in any other country. Most primates share six basic features including forward-facing eyes, eye sockets, grasping hands, nails, fingerprints, and large brains. Monkeys are seriously threatened by habitat loss–especially those that live in tropical forests, a habitat that is quickly disappearing. Twenty-one primate species are listed as critically endangered on the 2007 Red List of Threatened and Endangered Species. Forty-seven are endangered and 46 are vulnerable to extinction.