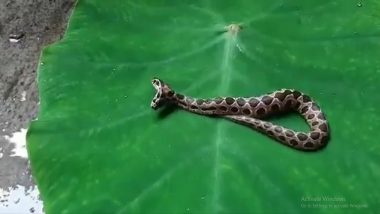 Mumbai, August 8: A rare Russell Viper with two heads was found in Kalyan, a suburban extension of Mumbai city. The snake was rescued carefully by local environmental conservationists, who handed over the reptile to the Forest Department. Since this particular type of serpent is not adaptive to live in the wild, it would be handed over to the Haffkine Institute in Parel. Snakes Glide Up on Trees in Shivamogga As Water Level in Karnataka’s Tunga River Rises After Heavy Rainfall (Watch Video).

Although the survivability changes of a two-headed snake is minimal, the rescuers are keeping their fingers crossed. The presence of two heads in a Russell Viper is considered as a genetic abnormality, similar to how some human twins are born with conjoined heads.

The Russell’s Viper is far more dangerous than most poisonous snakes because it harms you even if you survive the initial bite. pic.twitter.com/ATwEFFjaGy

The snake which rescued in Kalyan was highly poisonous, and similar to other Russell Vipers, it can detrimentally affect a person even if he or she survives the initial bite. Notably, the serpent was rescued on Thursday afternoon, after a person spotted it outside his housing society.

Members of the War Rescue Foundation (WRF), a local snake rescue body, were called by him at the housing society. They succeeded in rescuing the serpent without damaging it. The Forest Department was subsequently informed.

(The above story first appeared on LatestLY on Aug 08, 2020 11:15 PM IST. For more news and updates on politics, world, sports, entertainment and lifestyle, log on to our website latestly.com).