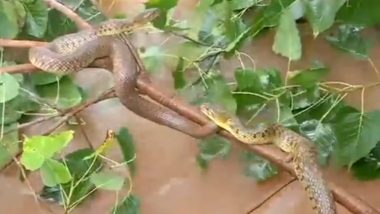 Video of snakes resting on a tree as the water level in River Tunga increased due to heavy rain in Shivamogga has gone viral. Heavy rainfall in Karnataka has to lead to a flood-like situation in the state. Video of snakes gliding on trees to save themselves from the flowing water is being widely shared on social platforms. Snakes were seen coiling around stems to avoid the river banks. The video shows two snakes on a brand as water gushes beneath them. The clip further shows the river which is overflowing its banks. Karnataka Rains: Temple Submerged in Water Due to Overflowing of Hemavathi River in Hassan (Watch Video)

Karnataka has been experiencing incessant rainfall and thunderstorms causing landslides and floods. Border regions such as Belagavi district have also been witnessing rising water levels in River Krishna. It has been due to swelling of the river's tributaries caused by heavy rains in Maharashtra.  River Cauvery is also overflowing and has submerged Bhagamandala temple, blocking roads in the district. Karnataka Rains: Kodagu District Faces Flood-Like Situation Due to Heavy Rainfall, River Hemavathi and River Cauvery Flow Over Danger Mark; See Pics.

Snakes often glide up to elevated spaces to save themselves during floods and heavy water flow. Multiple times in the past such videos of reptiles crawling up trees for self-protection has gone viral. A three-month-old baby was rescued by National Disaster Response Force (NDRF) at Balegundi village of Kodagu district in the state.

The Cauvery river too is overflowing and its floodwaters have inundated the Bhagamandala temple, blocking major connecting roads in the district. There have also been landslides near Botlappa and other areas of Kodagu, along with Charmadi ghat near Chikmagalur and Dakshina Kannada. Uttara Kannada and Shivamogga are some of the districts that also been flooded due to continuous heavy rains. Water being released from dams into the state is another reason for the floods

(The above story first appeared on LatestLY on Aug 08, 2020 12:26 PM IST. For more news and updates on politics, world, sports, entertainment and lifestyle, log on to our website latestly.com).