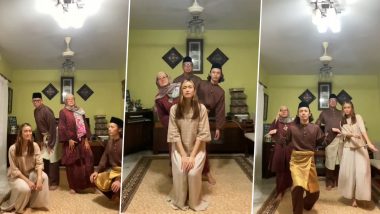 Video of a Muslim family dancing has gone viral on social media platforms. The family of four including the father, mother, daughter and son can be seen dancing together to Think About Things aping the same steps in the original video. Musician Adam Imanullah posted the video of his family dance on Twitter with the caption, "Salam Aidilfitri from my family to yours!" as Eid-al-Fitr 2020 is being celebrated across countries. As the video went viral people, Twitterati applauded the family's dance moves, especially, praising the father's grooves. After the video was released, many others replied to the tweet with clips of them dancing on the same song with their family members. Muslims in Malaysia celebrate Eid al-Fitr as Hari Raya Aidilfitri by following various customs and traditions. They wish their loved ones on the observance saying 'Selamat Hari Raya Aidilfitri' or ‘Happy Hari Raya'. Eid Mubarak 1441 AH Images & Happy Eid 2020 HD Wallpapers For Free Download Online: Celebrate Eid al-Fitr With WhatsApp Stickers and GIF Greetings.

The video is going viral and the family's performance seems to have impressed Twitterati a lot. More families wished Eid Mubarak on Twitter by sharing their dancing videos. With people loving the lyrics of the song and the video, more and more people are being inspired to dance with their families and post it on social media platforms. Ramadan 2020: From Missing Iftar Parties to Loved Ones, Twitterati Get Emotional on Spending the Holy Month of Fasting in Isolation During Lockdown.

Family Wishing Salam Aidilfitri  by Dancing to 'Think About Things':

Salam Aidilfitri from my family to yours! 🖤🖤🖤 pic.twitter.com/0cp9pO2dIf

We didn’t need to have #Eurovision to know that #Iceland won @julia_hills @paul_clarkson1 #Eurovision2020 pic.twitter.com/YsEeWVA3ng

Here is Original 'Think About Things;:

Think About Things which was released by Icelandic musician Daði Freyr in February 2020, it garnered a lot of interests on social media. And now it is going viral on TikTok with people dancing to the song with the seemingly easy dance steps. The video has received over 6.7 million views other than 143,100 retweets and over 509,900 likes on Twitter. One of the comments read, "The dad is surely has some grooves." Another comment agrees to it saying, "I was about to say the same! The dad on rhythm, groove on point!"

(The above story first appeared on LatestLY on May 25, 2020 03:26 PM IST. For more news and updates on politics, world, sports, entertainment and lifestyle, log on to our website latestly.com).