Mysterious Graveyard in Adelaide Town! Teddy Bears and Toys Appear on Tombstone of 2-Year-Old Boy, 134 Years After His Death!

The only information on this case is the death notice which mentions that the son died after two days of illness. 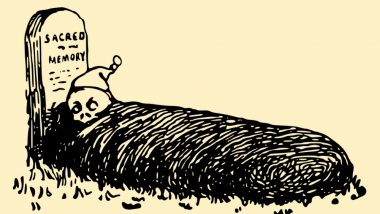 A small town in Adelaide is trying to uncover a mystery an eight-year-old mystery around its Hope Valley Cemetery. After 130 years of the death of a two-year-old child named Herbert Henry Dicker, teddy bears and toys have started appearing on his grave. Once a month for the past eight years, toys appear on the tombstone of the little boy who passed away in 1885. Herbert Henry Dicker died on June 2, 1885, and there are no living relatives of him in the area, which makes the appearance of these toys even spookier. Mystery of Nursery Rhyme Playing at Odd Hours in England's Town Solved! Spiders Triggered The Thief Alarm.

History officer David Brooks decided to investigate and spoke to the locals in the community but found no trace of who is leaving these toys. He thought people from the childcare centre adjacent to the cemetery is tending to the grave but that too isn't the case. The only information on this case is the death notice which mentions that the son died after two days of illness. Woman Gets Swallowed Into Her Parents' Grave at Long Island Cemetery! Files $5 Million Suit For Injuries.

And Brooks is so adamant about uncovering this mystery that he has even organised a night-time guide of the cemetery on May 1. After the death of Dicker, the family moved from suburban Adelaide to the Northwestern coast of Tasmania. The family moved along with their ten children in the year 1890 and all of them survived. The director of the Good Start Early Learning Hope Valley also does not know anything on these mystery toys. It continues for 8 years and still, no one knows who is this person leaving trucks, teddy bears and other toys at the grave. Brooks even joked in ABC report that probably Herbert is stealing toys now. Well, that would sure be scary.

(The above story first appeared on LatestLY on Apr 24, 2019 10:46 AM IST. For more news and updates on politics, world, sports, entertainment and lifestyle, log on to our website latestly.com).