Sitharaman was not impressed by the "minute-to-minute" itinerary made for her and the minister's displeasure was caught on camera. 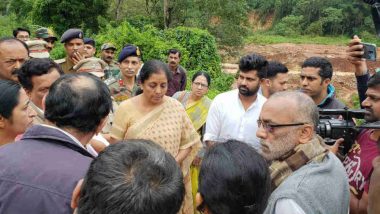 Defence Minister Nirmala Sitharaman on Friday visited flood-affected areas in Kodagu district of Karnataka to review the situation. However, the minister was not impressed by the "minute-to-minute" itinerary and her displeasure was caught on camera. Video recorded ahead of a press conference held in Madikeri shows the central minister losing her cool at Karnataka Minister Sa Ra Mahesh. However, social media was upset by Sitharaman's reaction asking if this was the behaviour expected out of a Union Minister.

Here is what Brijesh Kalappa tweeted:

Why so much attitude Madam?! Are Central Ministers manufactured in heaven? https://t.co/QixFiCQvKv

In the video, Sitharaman can be heard saying, "I am following a minute-to-minute programme, minister. If officials are important, my parivaar (family) is also important. Central minister follows the minister in-charge here. Unbelievable." When Sitharaman was told that the microphones were recording her, she said, "Let it get recorded." The entire episode took place at the district commissioner's office where various government officials and media were present. Internet users also tried to lecture the minister on socially accepted behaviour.

@nsitharaman Madam, mind your tone when you're talking to an elected representative Sa Ra Mahesh who is in Kodagu since last 2 weeks handling the relief work.

Show your arrogance in front of your masters, not here. Calm tf down and get us the funds we need. #ArrogantMigrantMP pic.twitter.com/MWZ5i9twZK

Sitharaman, Rajya Sabha member from Karnataka, also says that she does not want any officials who are assigned at fields for rehabilitation work to be present stating that none of that should be affected.

State Governments derive their powers from our Constitution not from the Centre. The Constitution has distributed powers among the Centre and States to ensure an equitable partnership between both. We are not inferior to the Centre. We are partners @nsitharaman

Sitharaman donated Rs one crore from the Members of Parliament Local Area Development (MPLAD) for flood-hit Kodagu and assured the locals that the Army would help in rebuilding roads.

Dear Ms @nsitharaman : Politics is about public service, not some pathetic ceremonial protocol about who speaks first, who gets the PR. And that too amidst the anguish of #KeralaFloods where your government has been found wanting. This is political arrogance at its lowest ebb.

She told reporters in Madikeri, "I can assure you that the task force of the Indian Army's Border Roads Organisation (BRO) will visit as consultants and advise the administration on how to build roads in hilly areas."

Karnataka is doing everything in its capacity to provide relief for Kodagu in flood affected regions. With what right can @nsitharaman lash out at Karnataka govt officials? Is that the definition of cooperative federalism for BJP??

Following her visit, the Karnataka district in-charge minister stated that Sitharaman's comments were a reaction to the state's demand for funds from the centre to Kodagu.

He told a local TV channel, "She would have known the pain had she contested election by standing with the electorate, going to every house, meeting voters and asked their problems. She has been elected to Rajya Sabha from Karnataka." He said that the state had requested monetary aid for Kodagu like the centre gave to Kerala. The torrential rains that lashed the district last week claimed at least 17 lives and left 5,000 people homeless. Earlier this month, Karnataka CM HD Kumaraswamy said that 11,000 houses have been washed away in the flash floods.

(The above story first appeared on LatestLY on Aug 25, 2018 12:51 PM IST. For more news and updates on politics, world, sports, entertainment and lifestyle, log on to our website latestly.com).