Old Video of Texas Mayor Caught Farting on Tape After He Forgot to Switch Off Mic is Going Viral, Netizens Wonder if He Washed His Hands 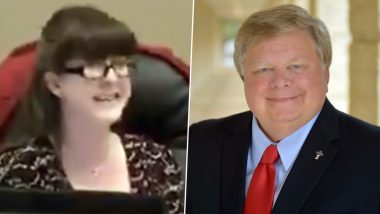 An old video of Texas Mayor caught farting on tape is doing the rounds online. There have been numerous instances of politicians embarrassing gaffes that have been caught on video. But in 2015, in Georgetown, Texas Mayor Dale Ross forgot to turn off the microphone when he went to use the washroom. While in the washroom, Ross was passing the wind while urinating and all the sounds were heard on the outside. As Rachael Jonrowe tried her best to ignore the fart sounds, even she could not help but giggle on. This old video has resurfaced online and is going viral once again on Twitter. And this time netizens are wondering if he washed his hands. Fart Disrupts Debate at Kenyan Assembly! Speaker Suspends Proceedings Due to Foul Smell.

In February 2020, Donald Trump retweeted the video, which once again got it in the limelight. And looks like, how much ever Dale may want to forget about it, the internet won't let him. The video has once again been shared online on Twitter, this time giving it an angle of Coronavirus meeting! The original meeting was also about infectious disease. Mayor Pro Tem Rachael Jonrowe was speaking on an antibiotic-resistant infectious disease just before Mayor Dale excused himself to go the washroom. But he forgot to switch off his microphone and definitely wasn't too quiet as he peed. His continuous farts were heard on the mic to everyone. Ugandan Man's Farts Can Kill Mosquitoes 6 Miles Away, Hopes to Get Hired by Insect Repellent Company (Watch Video).

Watch The Video of Mayor Caught Farting on Tape in Texas:

He forgets to switch his microphone off after going to the bathroom 🤣🤣😷😷😷😷 #covidー19uk #CoronavirusOutbreak pic.twitter.com/FZ3outRN82

We bet you can't stop laughing too. The video has got over 6 million views and 3,400 retweets. As funny as the video is, the comments are also hilarious with some people wondering if he washed his hands. Check how Twitterati reacted.

I laughed so hard I cried.

The video was cut but it didn't seem long enough for 20sec hand washing.

Cheered me up in all the gloom

(The above story first appeared on LatestLY on Mar 17, 2020 12:30 PM IST. For more news and updates on politics, world, sports, entertainment and lifestyle, log on to our website latestly.com).