Rahul Dravid Birthday Special: All The Times When The Gentleman of Cricket Won Hearts Off The Field 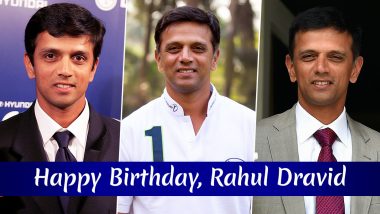 Rahul 'The Wall' Dravid is celebrating his 47th birthday today. When we hear the name Rahul Dravid, the one word that comes to the mind is 'Gentleman'. Such was and continues to be the aura around the former Indian cricketer that not many can help but love him for not just the player he is but also the person he is.

While Dravid, Mr Dependable, has won accolades while playing on the field for his scintillating cricketing career, he has also been a hero and has won hearts many times off the field. From being a fan's hero to being an honest citizen, Dravid has indeed been a gentleman. On his birthday, let's take a look at the times when Jammy won hearts off the field. Rahul Dravid Quotes To Remember As Indian Batting Legend Turns 47.

When He Fulfilled a Fan's Last Wish

One of Dravid's fans wanted to speak to him while he was on his death bed, suffering from blood cancer at a hospital. He shared the desire with one of his friends who tried to contact Dravid, but had little hope. But Dravid didn't disappoint. The fan, Akshay Dhoke, got a call from Dravid's wife telling him that the cricketer had read his friend's email and wished to do a Skype call with him. Dhoke had his last wish fulfilled when Dravid spoke to him over Skype.

Video of The Skype Call

In 2017, Bangalore University decided to award the cricketer an honorary doctorate degree. However, Dravid refused to accept the honour and said that he would study to earn it. "The thing about the doctorate is that my mom did her PhD and earned a doctorate at the age of 55. My wife’s a surgeon who studied seven years to get a degree in surgery. And I’ve always felt that if it was something I wanted, I would like to have earned it. I don’t mean that anyone else should have that feeling and I’m not trying to belittle anyone else. It’s just that I felt that way, because of my own experiences," Dravid had said then. What a man!

When Dravid Batted For Pay Parity

In 2018, when Dravid coached the Under 19 cricket team to a victory in the Under 19 World Cup, the BCCI had announced incentives for the team. The BCCI announced incentives worth Rs 50 lakh for Dravid, Rs 30 lakh for each player and Rs 20 lakhs for the support staff. However, Dravid was upset and insisted that everyone be awarded equally. The Board of Control for Cricket in India (BCCI) then announced that each member of the coaching staff, including the coach, would get Rs 25 lakh each.

When Rahul Dravid Stood in Queue

That's Rahul Dravid in a queue with his kids at a science exibhition.

Queueing just like any other normal parent... really admirable... pic.twitter.com/NFYMuDqubE

We rarely see celebs stand in queue anywhere. But Rahul Dravid is one of those rare celebs. In 2017, fans were all praise for Dravid when he was seen standing in a queue at a science exhibition with his kids, waiting for his turn to come.

Dravid has had rough days in the recent past with the Conflict of Interest proceedings against him. But a man of his character always comes out of it and so he did. Rahul Dravid was cleared of conflict of interest by the BCCI in November last year. Having met Rahul Dravid, I can confidently say there are very few men who can carry that stature and that character simultaneously. Here's wishing Rahul Dravid a very happy 47th Birthday!

(The above story first appeared on LatestLY on Jan 11, 2020 08:30 AM IST. For more news and updates on politics, world, sports, entertainment and lifestyle, log on to our website latestly.com).