Among the flurry of wedding gifts in the name of Bollywood star couple Ranbir Kapoor and Alia Bhatt, the most unique one happens to be a pair of rescued horses named after the actor-couple given their love for animals. 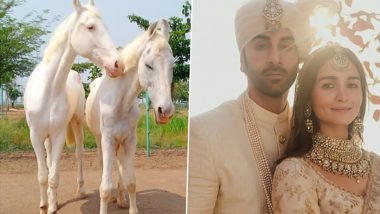 Among the flurry of wedding gifts in the name of Bollywood star couple Ranbir Kapoor and Alia Bhatt, the most unique one happens to be a pair of rescued horses named after the actor-couple given their love for animals. The pair consists of a mare and a stallion rescued from different locations. While the mare was being used for wedding ceremonies and was in a terrible condition when she was found, the stallion was confiscated from the Gateway of India in Mumbai, where he was being used for hauling a heavy Victoria carriage. The pair has been gifted to Ranbir and Alia by NGO Animal Rahat. Ranbir Kapoor-Alia Bhatt Wedding Album: See Dreamy Pictures From Couple’s Special Day.

Both the animals were in poor health when they were rescued. The mare was anaemic, had multiple infected wounds, and was so severely malnourished that her ribs and hip bones jutted out. The stallion, on the other hand, suffered from painful swelling on all four legs and acute osteoarthritis. Both the horses are now living at one of Animal Rahat's sanctuaries, where they receive nutritious food as well as veterinary care. Ranbir Kapoor-Alia Bhatt Marriage: Neetu Kapoor Shares Late Rishi Kapoor’s Now-Fulfilled Wish (View Post).

Commenting on the occasion, Naresh Upreti, Chief Operating Officer, Animal Rahat said in a statement, "Alia Bhatt and Ranbir Kapoor chose to keep their big day horse-free. A wedding is a perfect occasion for anyone to spare a thought for and show love to all our fellow sentient beings." Animal Rahat is a non-profit organisation that offers free aid for horses who pull carts or are used at weddings, donkeys which are used by brick kilns, and bullocks that work in sugar mills.

(The above story first appeared on LatestLY on Apr 15, 2022 02:47 PM IST. For more news and updates on politics, world, sports, entertainment and lifestyle, log on to our website latestly.com).