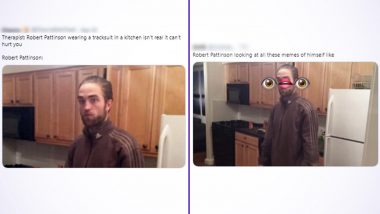 These days anything, new or old can become into a meme. All it needs is one idea that goes viral and then starts a trend. The recent meme template is of actor Robert Pattinson standing in a kitchen wearing a brown-coloured tracksuit. The picture is not a recent one, but the memes really are. Robert Pattinson tracksuit memes are now trending online as netizens describe it as a horrific thing they see. In the particular picture, Pattinson looks shocked and really out of place. But fans have fitted him in many places, including Twilight scenes to make funny memes and jokes. The Batman: Robert Pattinson’s First Pictures as the Dark Knight Get Leaked and Fans Are Already Making Emo Memes! (View Pics).

A little background to the picture, the photo was taken behind the scenes during the shoot of Good Time. Three years later, someone decided to reinvent it into a meme and after it went viral on social media, it started a meme fest online. All it needs is access to one meme template and it grows into a trend. So after the meme with Robert Pattinson's photo in a tracksuit standing oddly in a kitchen surfaced online, it started a meme trend. Some people even made Tiktok videos around it, which only made it go more viral.

Here's The One That Went Really Viral

“Help your cousin get more folding chairs from the garage”

oh no Bella watch out!! pic.twitter.com/FH1jYJk5HR

On The Doorbell Camera

i found this guy standing outside my house does anyone know how he got here? pic.twitter.com/xuieRPHKaM

Therapist: Robert Pattinson wearing a tracksuit in a kitchen isn’t real it can’t hurt you

Haha, Renovated Him Out!

renovated my kitchen! before and after. what do u guys think? pic.twitter.com/7YjRbcbtnI

me during google meet classes pic.twitter.com/dygt5m6UUR

Even Spiderman's Wondering About Him

Even Spiderman is talking about Robert Pattinson cursed meme. pic.twitter.com/jzjoovSWL0

Robert Pattinson looking at all these memes of himself like pic.twitter.com/OsCa70Syho

Many people have called these memes a good part of the year 2020 as they cannot stop laughing at these funny jokes. The meme template is just the main picture of the actor standing in the kitchen and that is all it took to be all over social media and making people laugh.

(The above story first appeared on LatestLY on Sep 26, 2020 06:09 PM IST. For more news and updates on politics, world, sports, entertainment and lifestyle, log on to our website latestly.com).