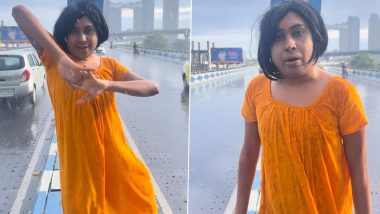 Kolkata, September 21: A social media influencer from Kolkata, Sandy Saha, has been fined for illegally parking his car on the Maa flyover in the city to shoot a dance video. Sandy Saha shared the video on his Facebook account. In the video, which was shot last week, the social media influences can be seen dancing on the flyover amid heavy traffic on the Bollywood song “Main aai hun UP Bihar lutne”.

Social media users tagged the Kolkata police to bring the matter to their notice. Saha is a well-known personality in West Bengal. He is also a social worker, actor and comedian. The driver of the car parked the vehicle on the flyover, and the social media influencer came out and crossed the road to perform on the dance number. Social Media Influencers to Corner Rs 900 Cr in 2021; Grow to Rs 2,200 Cr by 2025: Report.

The video, which was uploaded on September 13, has crossed over 2.3 million views so far. Saha claimed that he had not broken any traffic rules. However, the social media influencer admitted that he did not know that stopping a vehicle on the flyover was prohibited.

A fine notice has been sent to Saha. A case was registered by the Kolkata Police on Tuesday. The driver and the owner of the car were asked to appear at the Kolkata Police headquarters. Notably, the video was shot amid rainfall. As per a report by India Today, the driver was fined, and his license was also cancelled.

(The above story first appeared on LatestLY on Sep 21, 2021 07:04 PM IST. For more news and updates on politics, world, sports, entertainment and lifestyle, log on to our website latestly.com).