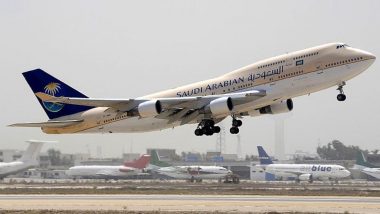 In an utterly shocking incident, a Saudi woman boarded the plane forgetting her baby at the airport. While flights are generally not returned to the airport to collect forgotten things from the airport, this was a terribly emergency situation. The incident happened at Jeddah's King Abdulaziz International Airport on a Saudi Arabian Airlines' plane.

In a video posted on social media, the pilot and Air Traffic Control (ATC) operators can be heard talking about the situation. Reportedly, the operator takes down the flight number and asks a colleague about the protocol. He then says, "This flight is requesting to come back…a passenger forgot her baby in the waiting area, the poor thing." The operator then asks the pilot about turning back to the airport. Passenger Sets His Own Luggage on Fire After PIA Flight Got Cancelled at Islamabad International Airport (Watch Video)

The pilot again says, "We told you, a passenger left her baby in the terminal and refuses to continue the flight." To which he receives a nod to return to the airport. A man can be heard saying, "Ok, head back to the gate. This is totally a new one for us!" Reportedly, the mother onboard told a crew member that she had forgotten her baby at the airport. As per reports, flight SV832 from Jeddah to Kuala Lumpur was turned back after the woman refused to continue flying. Chinese Man Throws Coins Into Lucky Air Plane's Engine Hoping For a Safe Flight, Airline Sues Him.

The strange incident however ended on a happy note as the baby and mother were united at the airport. As the video went viral, social media users praised the pilot for his timely action. Meanwhile, the mother received a lot of criticisms for forgetting her own child at the airport and boarding the plane.

(The above story first appeared on LatestLY on Mar 11, 2019 05:15 PM IST. For more news and updates on politics, world, sports, entertainment and lifestyle, log on to our website latestly.com).