Seoul Dairy, the parent company of Seoul Milk, issued an official apology after its facing backlash for its recent video commercial depicting women as cows. 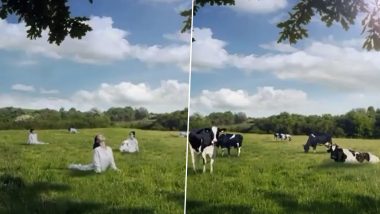 Seoul, December 16: Seoul Milk, the largest dairy company in South Korea, recently released a video advertisement wherein women were depicted as cows. The commercial received massive backlash from the public and also stirred a debate about sexism in the country. Though the dairy giant had earlier said that the ad was not received as it had intended as they wanted to focus on organic origins of their products and not the controversial depiction of women as cows, the company has now issued an official apology.

"We sincerely apologize to everyone who may have felt uncomfortable due to the milk advertisement video uploaded to the official YouTube channel of Seoul Milk on the 29th of last month," Seoul Dairy Cooperative, the parent company of Seoul Milk, said in a statement on its official website, as per a report by the CNN. From Objectifying Women as 'Late Night Benefits' to Other Sexists Job Ads by Chinese Tech Giants Alibaba, Tencent, Huawei & Baidu.

The controversial video ad showed a male photographer roaming around in a forest area to capture pictures when he comes across a group of women dressed in white clothes drinking water and stretching in fields. He tries to capture them on his camera, however he accidentally steps on a twig which disturbs the women and they transform into cows. Kent RO Issues Public Apology, Removes Distasteful Atta Dough Maker Ad Featuring Hema Malini and Esha Deol Dubbing Domestic Helps As Infection Carriers.

The video also faced criticism as people felt that it is promoting filming of women without their awareness as the photographer can be seen hiding and attempting to shoot the women who eventually transform into cows. After the massive outrage, the company has issued an apology in this regard.

(The above story first appeared on LatestLY on Dec 16, 2021 12:29 PM IST. For more news and updates on politics, world, sports, entertainment and lifestyle, log on to our website latestly.com).