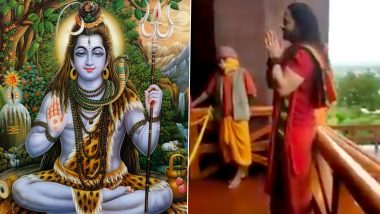 Have you heard of Shiva Tandava Strotram? Devotees of Mahadev may have heard it time and again, but a video of a priest from Bhojpur temple reciting it is giving people goosebumps. Kalicharan Maharaj sings the Shiva Tandava Strotam with all the music and people around clapping for him. The video is getting all appreciation on Twitter because of his, high-pitched voice and the energy which reverberates throughout the clip. We have got you a full video of Shiv Taandav Stotram by Kalicharan Maharaj at Bhojpur Temple in Madhya Pradesh. Learn About the Significance of Lord Shiva’s Accessories & Symbols.

Hindu mythology worships several gods and goddesses and among them, the primary ones include the Holy Trinity of Brahma, Vishnu and Mahesh as creator, preserver and destroyer. Lord Shiva plays the part of the destroyer, also called as Mahadev, the greatest of the Gods. Lord Shiva has a lot of symbols, accessories and divinity associated with him. And one of the things that describe his power and beauty is the Shiva Tandava. It is a Sanskrit stotra (hymn) which is attributed to King Ravana, the greatest devotee of Shiva. Maharaj Kalicharan has a stern voice with which he recites the Shiva Tandava strotram and that is giving all devotees all the divine feels. His video is going viral on Twitter.

Can't recall when I last saw something so elemental and yet so overpowering.

When his eyes closed, it was as though he became his own judge; cruel, merciless; the destroyer of his vanity. Before the Destroyer of the World himself.

Breathtaking & inspiring. While most of us don’t have his voice, many Hindus share the feelings he’s expressing. #Bhakti pic.twitter.com/AhLYIWgMED

In case, you want to loop on the full video, check it here:

A little more about the Shiva Tandava Strota, it has a story that Ravana was such a big devotee of Lord Shiva he tried to carry the abode of Shiva to Lanka. But Shiva decided to teach him a lesson and it crashed down on him. Realising the power of Shiva he played a tune to praise Shiva, which is called as the Shiva Tandava Stotram.

(The above story first appeared on LatestLY on Jul 16, 2020 04:15 PM IST. For more news and updates on politics, world, sports, entertainment and lifestyle, log on to our website latestly.com).