Tempo Without Driver Moves on Ankleshwar Highway in Gujarat and Crashes Into a Truck, Old Video Goes Viral on Social Media 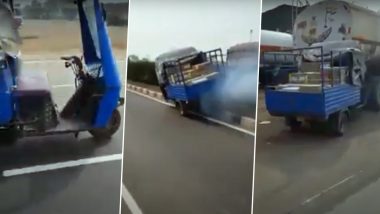 The current lockdown has been presenting us with certain things we least expected. Social media has been witness to some unique things in the recent past. With people at home spending quite a lot of time on social media, old viral videos have started circulating all over again. The latest in such videos is a tempo moving without a driver at Ankleshwar highway. In the video, a blue-coloured tempo can be seen moving on the highway without a driver and later hitting into a truck. While the clip is being widely shared now, the footage is actually from 2017. It was then widely reported in the media too. However, it is all over going viral on social media platforms as people believe it was a recent incident. Hyderabad: 10-Year-Old Boy Seen Driving Car With Parents Sitting at The Back, Police Charge Just Rs 2000 After Video Goes Viral!

The video shows the small tempo going past vehicles on the highway. A motorist seems to have captured the footage on a phone camera. As the tempo drives on it own, it tries to get onto the divide but then soon turns to the other side of the road. It almost hits a lorry and the goes ahead at the same speed. The tempo only comes to a halt after hitting a truck parked on the side of the road.

Original Video of the Tempo Without Driver on Gujarat Highway:

The video continues to be shared widely on the internet with people believing it a recent incident. However, it was taken three years ago. The tempo was carrying some boxes, seems it was transporting something when the driver lost control of it.

(The above story first appeared on LatestLY on May 26, 2020 11:22 AM IST. For more news and updates on politics, world, sports, entertainment and lifestyle, log on to our website latestly.com).