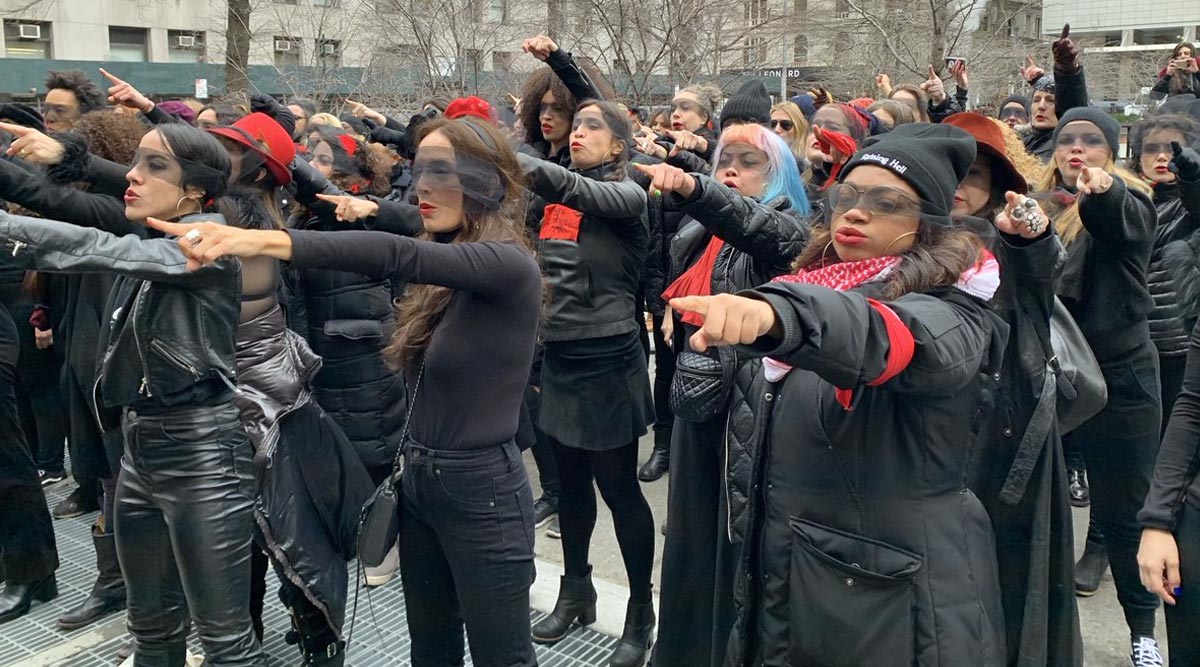 The increasing number of sexual abuse against women, thousands of women in November were captured taking to streets in Valparaiso and Santiago, in Chile performing, “A Rapist In Your Path.” A month later, an organised group of women gathered outside Harvey Weinstein’s rape trial in New York, staging flash mob, the song, which is being named as the feminist anthem. The group pointed at the courthouse, chanting, “The Rapist is You.” The disgraced movie mogul was inside the courthouse for the jury selection for his rape trial that reportedly began this week. The protesters outside the courthouse chanted in both Spanish and English. “It’s the judges, the state, the president, the oppressive state is the rapist. It’s not my fault or how I dressed. The rapist is you,” they can be heard chanting. The videos capturing the startling moment were uploaded on social media and has since gone viral. ‘The Rapist Is You’ Chilean Protest Song Against Sexual Violence and Victim-Shaming Goes Viral.

According to reports, nearly 100 women, some from political action groups across the New York City, performed the song. Both in Spanish, “Un Violador en tu Camino,” and English, “A Rapist in Your Path,” in front of the Manhattan Criminal Courthouse on January 10, 2020. Weinstein, whose alleged heinous actions was inside the courthouse, appearing for another day of his trial. The performance involved the women, pointing toward the judges, police and all institutions that repeatedly have failed survivors of sexual assault. Harvey Weinstein’s Presence at New York Bar Sparks Rage, Woman Calls Out the Producer & Brands Him a ‘F**king Rapist’.

Dramatic protest happening outside the Weinstein trial: a Chilean feminist anthem/dance gone viral/global, created "to show rape not just as a crime against an individual woman, but the expression of a larger social issue." https://t.co/9rVxmT8uXn pic.twitter.com/EGegrCY3iY

These demonstrations began in Valparaiso and Santiago in Chile in November, 2019 and have since been performed in various corners of the globe. Feminists in Colombia, France, India, Turkey and now the United States have staged the flash mob, protesting. “A Rapist in Your Path” is reportedly based on the work of the Argentinian theorist, Rita Segato, who argued sexual violence is a political problem and not a moral one.

Here's Another Video From the Protest:

Better video of the feminist flash mob outside the courthouse where Weinstein is being tried. The message, in English and Spanish: the problem of sexual violence is global, and it’s systemic. pic.twitter.com/gqHjxmPfIw

In 2017, dozens of sexual allegations emerged against Harvey Weinstein. He faces five charges including rape and predatory sexual assault relation to two unnamed accusers. The disgraced American film producer has been publically accused of sexual misconduct, abuse or rape by 80 women. The trial in New York is based on the allegations made by two women—he is charged with raping one in a hotel room in New York in 2013 and performing a forcible sex act on the second woman in 2006. However, he denies both the charges.