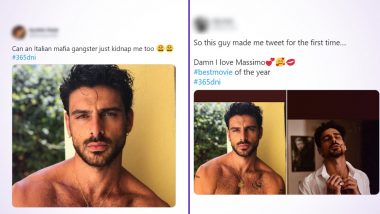 However, the story revolves around the story of a rich Italian mafia, Massimo who keeps this woman he often dreams about, Laura hostage. He gives her 365 days to fall in love with her and the time they spend shows Massimo doing everything to make her like him back and during this time scenes perfectly capture the sexual tension between two and later some x-rated sex scenes are in store for the viewers. However, women on the internet are going crazy for Michele Marrone and have taken over Twitter to express their fangirl moment in forms of memes, jokes and tweet. Check out the best ones:

So this guy made me tweet for the first time....

Can an Italian mafia gangster just kidnap me too 😩😩 #365dni pic.twitter.com/0Qbl8HVURS

Massimo is Viral on TikTok

♬ To much love - bxtchtunezz

That yacht scene thou #365dni pic.twitter.com/cfh6ocvqKf

Truer Words Haven't Been Spoken Before

Are You Lost Baby Girl?

Not a Single Soul:

The movie, however, has been criticised for romanticising a toxic relationship called the Stockholm Syndrome which sees hostages falling in love with their captors after being around them for some time. It is said to be a dangerous form of relationship.

(The above story first appeared on LatestLY on Jun 16, 2020 12:43 PM IST. For more news and updates on politics, world, sports, entertainment and lifestyle, log on to our website latestly.com).