Twitterati Are Having a Field Day Making Funny Jokes and Memes on Trending Hashtag #BoycottTwitter on Twitter! Irony Just Died, Hypocrisy Is Alive 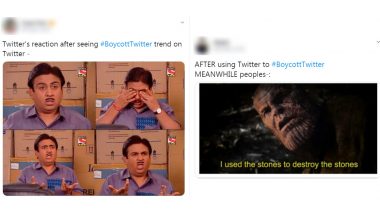 #BoycottTwitter is running as one of the top trending hashtags on Twitter itself. Hypocrite much?! Desi netizens are angry at the microblogging site, after Twitter temporarily restricted Indian dairy brand, Amul. This is why, as a sign of rally, users are trending to boycott the social media site, on the social media platform, itself. This is quite amusing to Twitterati as well. They are quite having a field day by making funny jokes and memes on the trending hashtag on Twitter. The reactions display how irony just died, and hypocrisy is alive on the social media platform. Amul 'Exit the Dragon' Ad Controversy: Twitter Clarifies, Says Account Was Restricted Due to Security Reasons, Not Because of Content.

To those who are not fully aware of the reason behind the viral hashtag, let us tell how what exactly enraged desi Twitterati. Amul recently posted a topical ad over the boycott of Chinese products, which was also a trending hashtag, running on social media amid India-China border tension. Called ‘Exit the Dragon,’ the ad features Amul’s Utterly Butterly girl protecting India from a dragon, which is considered a symbol of power and good luck in China. Because of the ‘boycott Chinese products’ campaign on social media, the topical surely received immense engagement, with many retweeting the topical ad.

It was initially believed that because of the ‘Exit the Dragon’ topical ad, Twitter restricted Amul momentarily. The microblogging site soon clarified to LatestLY that the brand’s Twitter account was restricted for security purposes. But can you stop netizens from landing into controversy? We don’t think so! Soon #Amul began to trend in support of the brand and now #BoycottTwitter on the microblogging site. Controversial or not, Twitter users sure find it amusing that how the platform is used to boycott the platform itself. The #BoycottTwitter funny memes and jokes show that irony just died on Twitter, while hypocrisy remains alive.

Check Out the Memes

It Couldn't Have Been More Relatable!

These are the best reactions and tweets from the ongoing hashtag, #BoycottTwitter. Twitter users could not contain their laughter on the very amusing fact on how the platform is being used to ban the platform itself. Meanwhile, Amul official Twitter account has been restored, and the topical ad in question remains.

(The above story first appeared on LatestLY on Jun 07, 2020 08:52 AM IST. For more news and updates on politics, world, sports, entertainment and lifestyle, log on to our website latestly.com).