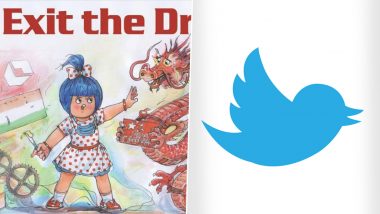 New Delhi, June 6: India's iconic dairy brand, Amul on Saturday said the company's official Twitter account was blocked on June 4. Incidentally, Amul's Twitter account was restricted briefly a day after the company published an advertisement critical of China's reported intrusion in eastern Ladakh, which is India's territory. After the matter came to the fore on Saturday, Twitter issued a clarification, saying the Amul's account was restricted for security reasons and not because of the content.

Reacting to LatestLY's story on the entire controversy, Twitter issued a statement, suggesting Amul's Twitter account was restricted for security purposes. "Safety and security of the accounts is a key priority for us and to ensure an account has not been compromised sometimes we require the account owner to complete a simple reCAPTCHA process," a Twitter spokesperson told LatestLY.

Reports have surfaced that the Chinese military is hindering normal patrolling along the Line of Actual Control or LAC in Ladakh and Sikkim. Defence Minister Rajnath Singh recently said that a "sizeable number" of Chinese troops have moved into eastern Ladakh.

(The above story first appeared on LatestLY on Jun 06, 2020 05:53 PM IST. For more news and updates on politics, world, sports, entertainment and lifestyle, log on to our website latestly.com).