In a brave move, an RPF officer saved the life of a woman trying to get off the moving train but nearly got stuck in the gap, but the officer’s timely instinct saved her. The incident took place in Bhubaneswar, Orissa. 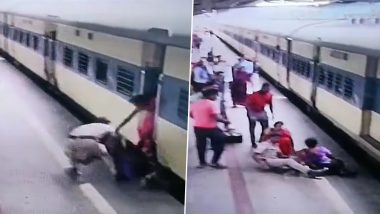 A Railway Protection Force (RPF) personnel at Bhubaneswar railway station on Wednesday acted fast to save a deboarding woman from getting stuck in the gap between the train and the platform as the train began to pull out, which could have proved fatal for her, officials said.

The incident took place when the woman tried to get off the moving train and, in the process, slipped and nearly got stuck in the gap. CCTV footage of the incident has gone viral. Video of Mumbai Police Constable Playing ‘Sandese Aate Hain’ on Flute Will Take Away Your Mid-Week Blues!

"RPF head constable S. Munda has saved the life of the woman passenger, who slipped while deboarding from Palasa-Cuttack passenger train at platform No.3 of the Bhubaneswar railway station," railway officials said.

#WATCH | Odisha: Railway Protection Force (RPF) head constable S Munda saved the life of a lady passenger by saving her from falling into the gap between the platform and the train at Bhubaneswar Railway Station yesterday, May 11

The train reached platform No. 3 of Bhubaneswar railway station at around 10.05 a.m. and started moving from the platform after a halt of five minutes, Munda said, adding that the woman passenger-only sought to get off as the train began moving.

"I saw that the woman passenger slipped and nearly got stuck in the gap between the train and platform. At that very moment, I pulled out the woman along with another woman co-passenger (who was also looking to de-board the train) to the platform and saved her from the jaws of death," he said.

(The above story first appeared on LatestLY on May 12, 2022 02:15 PM IST. For more news and updates on politics, world, sports, entertainment and lifestyle, log on to our website latestly.com).