Reports informed that the Nepartak storm formed on Friday and is most likely going to make landfall on Tuesday. However, it is still unclear if Tokyo will be in the center of the storm. It was upgraded on Friday from a tropical cyclone to a typhoon. 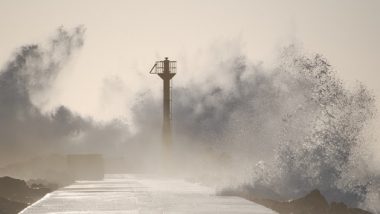 Tokyo, July 26: 2020 Tokyo Olympics braces itself for a typhoon that is expected to hit the city this week. According to weather agencies, Tropical Storm Nepartak, which had formed off Japan’s east coast, has now intensified and is expected to hit Tokyo late Monday or Tuesday. Several reports inform that the Nepartak storm, which was formed on Friday, is most likely going to make landfall on Tuesday. However, it is still unclear if Tokyo will be in the center of the storm. It was upgraded on Friday from a tropical cyclone to a typhoon.

As per details by Accuweather, early indications suggest Nepartak will make landfall as a tropical storm, though “the system reaching typhoon strength upon its arrival onshore has not yet been ruled out.” As per reports, the local organizing committee is also now preparing for a typhoon to hit the Olympics this week following the alert. The Olympic rowing and archery events have already been rescheduled in the wake of the typhoon threat. The  Olympic archery schedule was also altered for Tuesday due to expected high wind and rain. 2020 Tokyo Olympic Games Live Updates Day 3: Sutirtha Mukherjee Loses to Fu Yu of Portugal.

Takaya Masa, spokesperson of the Tokyo 2020 organizing committee was quoted by ESPN saying that the committee is looking closely at the path of the typhoon to make decisions as preventative measures, adding that changing the schedule is not a rare event, and one can understand the burden it'll have on athletes. "Unlike an earthquake, we're able to predict the path of a typhoon so we can make plans, and indeed when it comes to rowing, as a preventative measure, we have decided to change the schedule for the event," she said.

The 2020 Tokyo Olympics are currently underway after a year’s delay because of the COVID-19 pandemic. According to World Archery, this is the first time the Olympic archery scheduled has been majorly influenced by the weather conditions. It was in the 2008 Beijing Games, that there was an hour delay.

(The above story first appeared on LatestLY on Jul 26, 2021 10:01 AM IST. For more news and updates on politics, world, sports, entertainment and lifestyle, log on to our website latestly.com).