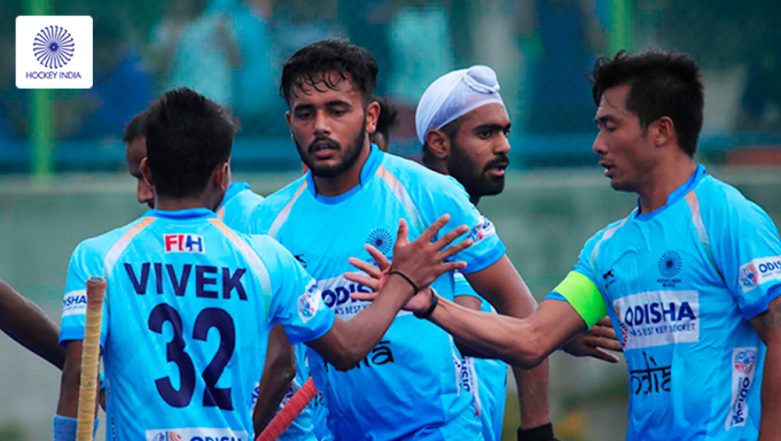 Jakarta, August 26: Reigning champions India men's hockey team defeated South Korea 5-3 to sit at the top spot of pool A of the 18th Asian Games on Sunday. India will only need a draw against Sri Lanka on Tuesday to end its pool as a top ranked team and enter the semi-finals. It was India's fourth successive victory in Pool after winning 17-0 against Indonesia, 26-0 against Hong-Kong China and 8-0 win against Japan in their first three matches respectively.

The team further won two penalty corners in the final minute of the first quarter. While Rupinder's first flick had to be taken again as it was blocked by the first rusher, his second attempt was well-saved by the South Korea goalkeeper.

However, only minutes earlier, Rupinder set-up India's second goal superbly converted by Vice Captain Chinglensana Singh Kangujam. It was a brilliant showcase of one-touch hockey where Rupinder's long-pass from the centre of the midfield found an impressive deflection off Chinglensana's stick.

India continued to play with superb speed, with impressive counter attacks that put the South Korea defence on immense pressure. India's third goal came in the 16th Minute through a smart scoop pass from Simranjeet Singh that was well controlled by Lalit Upadhyay who had positioned well to take a successful deflection that landed the ball over the Republic Of Korea goalkeeper into the net.

South Korea however made brave attempts to overcome the initial setback as they created chances to score. In the 24th minute, Republic Of Korea won two back-to-back penalty corners but couldn't make much of the opportunity as India goalkeeper PR Sreejesh and first rusher Manpreet Singh's efforts respectively ensured India kept a clean sheet.

In the following minute, Amit Rohidas helped win India's fourth penalty corner of the match but could not convert. South Korea immediately launched a quick-fire counter attack, landing the ball in their striking circle in just three touches. But the shot taken was way off the mark.

South Korea made a strong start to the third quarter when a long-pass into the circle trying to fetch a perfect deflection unfortunately hit the cross-bar. But a smart referral saw Republic Of Korea win a penalty corner. Sreejesh's block in an attempt to clear the ball was deemed dangerous as it hit the Republic Of Korea striker in the circle.

This time South Korea used a smart variation which was successfully converted by the team's skipper Manjae Jung. South Korea tricked India's defence to score yet another goal through Manjae that narrowed the team's lead to 2-3.

India missed some potential chances to score in the following minutes as forwards Akashdeep Singh and SV Sunil narrowly missed scoring goals in two separate attempts. The final quarter was tense as Republic Of Korea defence upped their ante while India pushed for goals.

Manpreet Singh struck India's fourth goal set up by a good interception by Akashdeep. Manpreet was excellent in receiving the ball from Akashdeep and made a quick dribble into the striking circle and took a powerful back-hand shot to beat Republic Of Korea goalkeeper that helped take India's lead to 4-2.

A clever pass by Mandeep Singh to Akashdeep saw him convert yet another splendid back-hand shot taking India's score to a comfortable 5-2. Meanwhile, India won a penalty corner with a little over four minutes left for the final hooter. A good flick by Rupinder was pushed away by the Republic Of Korea goalkeeper denying India's fifth attempt at penalty corner.