Top seed Kidambi Srikanth will face Kenta Nishimoto of Japan while third seed P.V Sindhu will take on Pai Yu Po of Chinese Taipei in their opening games of the Badminton Asia Championships here on Wednesday. 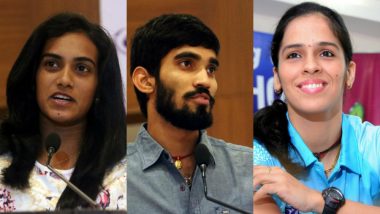 Saina Nehwal, who clinched the gold medal in the 21st Commonwealth Games in Gold Coast, will lock horns with Yeo Jia Min of Singapore in the women's singles match.

Top seed and defending champion Tai Tzu Ying of Chinese Taipei was drawn to face a qualifier in the first round and so is the second seed and last year's finalist Akane Yamaguchi of Japan.

Chen Yufei, World No. 5, and He Bingjiao, World No.8, will compete for the women's singles title for the hosts.

Apart from Srikanth, B. Sai Praneeth and Sameer Verma will face Suppanyu Avihingsanon of Thailand and Chinese Taipei Chou Tien Chen in their respective matches.

Chen Long, the Rio Olympic winner, also the reigning champion, will begin his title defence with an opener against a qualifier, reports Xinhua news agency.

But the current World No.3 has been struggling this season as he failed to reach the semifinal phase in any of the three BWF World Tour events he participated, including a first-round exit in the Malaysia Masters in January.

Chen's possible rival in the semifinal could be his Chinese compatriot, two-time winner Lin Dan. Widely considered as the best-ever men's shuttler in history, the 35-year-old inevitably sees the slump in form in recent years.

However, the Beijing and London Olympic champion is trying to extend his career as long as possible, and he has proved that he still got something to give out, just like as he did at the All-England Open one month ago, where he finished runner-up to another Chinese player Shi Yuqi.

The 2016 champion Lee Chong Wei of Malaysia, who has just clinched his third gold medal in the Commonwealth Games, will face a tough opener against China's young star Qiao Bin. If Lee enters the semi-final, he could meet Shi, the newly crowned All-England winner.

In men's doubles category, Manu Attri and B. Sumeeth Reddy will battle it out with Bodin Isara and Nipitphon Phuanphuapet of Thailand.

Defending champions Li Junhui and Liu Yuchen, current world No. 4, will face a pair of qualifiers in the first round, while another home duo Liu Cheng and Zhang Nan, will encounter with Takuro Hoki and Yugo Kobayashi of Japan. The two Chinese pairs will seek to set an all-Chinese final in the men's doubles.

Two-time defending champions of women's doubles, also the winners at Rio Olympics, Misaki Matsutomo and Ayaka Takahashi of Japan will take on qualifiers in the first round.

In the mixed doubles, top seed and 2015 champions Tontowi Ahmad and Liliyana Natsir of Indonesia will have Yuki Kaneko and Koharu Yonemoto of Japan as their first-round opponents while second seed Wang Yilyu and Huang Dongping of China will face Vietnam's Do Tuan Duc and Pham Nhu Thao.

China, the home favourites finished the last edition with three golds, including the men's singles, men's doubles and mixed doubles.

(The above story first appeared on LatestLY on Apr 25, 2018 11:59 AM IST. For more news and updates on politics, world, sports, entertainment and lifestyle, log on to our website latestly.com).