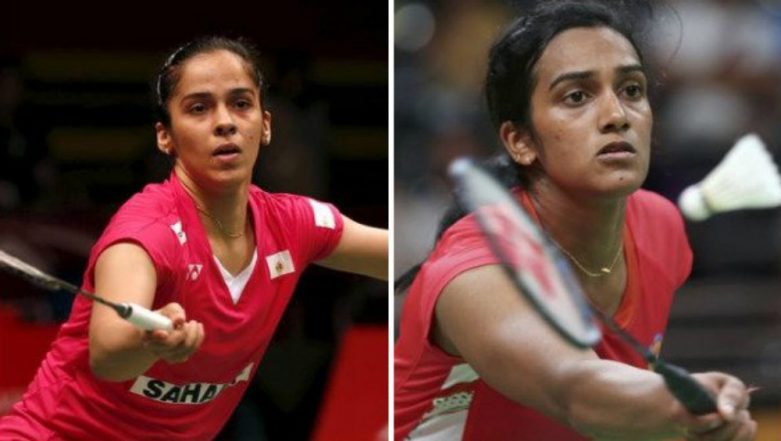 Get ready for the Sunday blockbuster on April 15, 2018 as two of India’s top badminton players Saina Nehwal and PV Sindhu are all set to take on each other in women’s singles final in Commonwealth Games 2018. Indian fans can barely contain their excitement as Saina and Sindhu are scheduled to play each other for the prestigious CWG 2018 gold medal in women’s singles finals at Carrara Sports Arena 2. Saina lead Sindhu 2-1 in head to head. Both Saina and PV Sindhu assured India of gold and silver medals in GC 2018 badminton by winning their respective semi-finals matches and set up the final encounter. With the big game taking place in Gold Coast, Australia, Indian badminton fans are making sure to get every information, from Sindhu vs Saina match timing in IST, live streaming to live telecast details of all-India CWG 2018 Women's Singles Badminton Gold Medal Match.

Saina Nehwal and PV Sindhu’s road to finals of women’s single match has been quite in contrast to each other. On one hand, Rio Olympic silver medallist Sindhu registered a fantastic victory over defending champion Michelle Li of Canada 21-18 21-8 in just 26 minutes. Meanwhile, former World No. 1 Saina Nehwal had to dig deep to struggle past 2014 silver medallist Kirsty Gilmour of Scotland 21-14 18-21 21-17 in 68 minutes. There match performances in the semi-finals reflect a lot about what’s in store when the two Indian powerhouses clash for the title on Sunday.

What is Saina vs Sindhu Final Date? And, the CWG 2018 Gold Medal Match Time in IST?

The all-Indian women’s singles finals of Commonwealth Games will take place between Saina Nehwal and PV Sindhu on April 15, 2018 i.e. Day 11 also the last day of the multi-sport tournament. Saina vs Sindhu dual is being held at Carrara Sports Arena 2. All the badminton matches will kick-start from 4.30 am IST (Indian Standard Timings) onwards and with women’s singles gold medal match scheduled second in the line-up, the estimated match timing should between 5:00-5:30 am IST (9:50 AEST).

Which Channels in India will do Live Broadcast of Saina Nehwal vs PV Sindhu Playing in CWG 2018 Women’s Singles Badminton Gold Medal Match?

For last 12 days, Sony Network has been responsible for bringing live action of Commonwealth Games 2018 to viewers in India. And, once again the biggest match from Indian perspective, Saina Nehwal vs PV Sindhu in finals will be live telecast by the network on Sony Six and Sony Ten 2 channels. Make sure to be present before the match commences and not miss any part of the exciting contest for the gold.

The official app of Sony Network, Sony Liv will be providing the live action between Saina Nehwal and PV Sindhu for the women’s singles gold on day 15 of Commonwealth Games 2018. The badminton fans can also visit the official website of Sony Liv i.e. www.sonyliv.com to watch the match online.

The buzz around Saina vs Sindhu is completely called for as they are two of the biggest ambassadors of the sport in India who are ready to lock horns for the top finish in Commonwealth Games 2018. Both are poster girls of Indian badminton, Olympics medal winners (Saina won bronze in 2012 London Olympics while Sindhu won silver in 2016 Rio Olympics) and more importantly, both are highly competent with go-getter attitude making the contest even more mouth-watering. In addition to the exhilarating contest, sports lovers will also see newly-crowned male singles player in badminton Kidambi Srikanth take on Chong Wei Lee of Malaysia in men’s singles gold medal match. Yes, India has a lot to play for and fans have a lot to cheer for on the last day of Gold Coast 2018 Commonwealth Games.