In fact, his father, acknowledging his son’s passion for the game and the amount of hard work and perseverance he was putting in, stands behind Adarsh like a pillar of support even today. 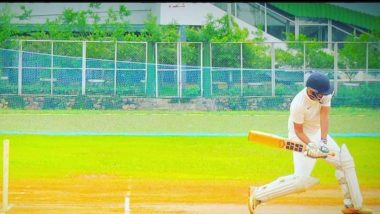 Cricket is a religion for Indians and cricketers are treated as no less than demi-gods! One such star in the making is Adarsh Singh, whose love for cricket started when he was a child. Though, at least one child in every Indian household is a cricket fan, not everyone reaches that exalted status of the Indian blue jersey. The story of Adarsh is different in the sense that he found his inspiration in cricket and worked very hard to reach where he is today.

Adarsh was born on February 24, 2002, in a Patna-based lower middle-class family, and financial stability was a sensitive issue. But his supportive parents didn’t allow that to be a handicap in the sports journey of their son. In fact, his father, acknowledging his son’s passion for the game and the amount of hard work and perseverance he was putting in, stands behind Adarsh like a pillar of support even today.

Adarsh has performed remarkably while playing for India’s under-16 and under-19 teams at the national level. In fact, he is the only young cricketer to have taken five wickets in zonal matches. His idol is the famous English all-rounder, Ben Stokes. Adarsh wants to reach the national cricket team and contribute to Indian victories just like Stokes does for the England cricket team. One of his best performances so far as been scoring two centuries while batting at number eight. Talking about his mentors and coaches, Robin Sir and Gulrej Sir, Adarsh says, “They both have guided me thoroughly through my journey. Whatever I am today is because of their training and guidance. Now, my goal is to play for Indian cricket at an international level and I am working hard towards achieving it.”

For Adarsh, the most heartening thing is that his dream has now become his father’s dream too. Since his first big victory on the field, Adarsh has been working through days and nights, practicing on the ground, learning from other players, looking at international matches as well as international players’ performances too. He also talks to his mentors as well as his father about his insecurities, doubts and plans, while seeking their advice on how to overcome the same. Today, he plays cricket, which he loves, and has been able to achieve a certain amount of financial stability for himself and his family.

But his goals are higher and bigger and Adarsh knows he won’t stop, till he has reached where he wants to reach. We wish all the best to this budding cricketer!