The Aussies used to have an aggressive approach on the field and escaping from their mind-games was certainly not easy. However, former Indian spinner Anil Kumble never needed to tackle these challenges as he was best friends with Shane Warne. 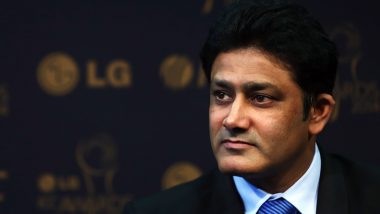 Australia dominated World Cricket in the first decade of the 2000’s and defeating them was certainly a big deal. They certainly had a fantastic bunch of batsmen and bowler but one aspect which defined the Aussie team of that era was sledging. The Aussies used to have an aggressive approach on the field and escaping from their mind-games was certainly not easy. However, former Indian spinner Anil Kumble never needed to tackle these challenges as he was best friends with Shane Warne. The legendary spinner has toured Australia on numerous occasions and was quite lucky to not have faced the verbal attack of the Aussies. Anil Kumble Reveals Surprising Details About His Remarkable 10-Wicket Haul Against Pakistan in 1999.

In an interview with Kings XI Punjab, Kumble was asked about getting sledged from the Australians to which he replied “No, I don’t remember much. What I’ve heard is ‘if you are a friend of Shane Warne, you never get sledged’. I was a friend of Shane Warne, so I didn’t get sledged.” Kumble led in the Indian side in their 2007-08 Tour of Australia where the Indian side did fairly well. The veteran spinner himself was his great form in the Test series as he just didn’t scalp a five-wicket haul at Melbourne but also played a memorable knock of 87 runs in Adelaide. Ravichandran Ashwin Beats Anil Kumble to Become Fastest Indian to Take 250 Test Wickets at Home, Reaches Milestone During IND vs BAN 1st Test Match.

The 49-years old also went on to said that he loved bowling against Australia as at that time, they were the best side in International cricket and he wanted to showcase his potential against the best in the business. Kumble also hailed the Indian batting line-up of that era by saying that he was fortunate to not bowl against the likes of Sachin Tendulkar, Virender Sehwag, VVS Laxman, Rahul Dravid and (Sourav) Ganguly as these players were in his side.

(The above story first appeared on LatestLY on Nov 28, 2019 12:08 PM IST. For more news and updates on politics, world, sports, entertainment and lifestyle, log on to our website latestly.com).