Anushka Sharma Gets Trolled After Australian Open Twitter Handle Tags Her as 'Legend' in Pic with Virat Kohli and Roger Federer! 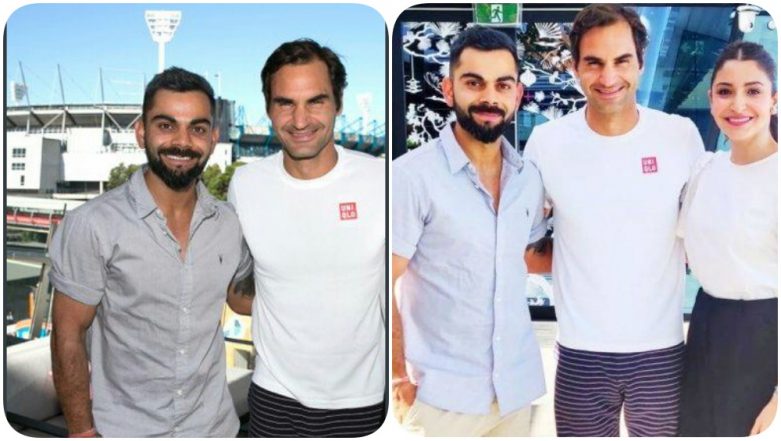 After winning the three-match ODI series and the Test series in style, India captain Virat Kohli went to watch the Australian Open 2019 matches with his wife Anushka Sharma. The duo even met Roger Federer after his match and posed for a few pics. The snaps were shared by Virat Kohli on social media and soon started trending. The official account of Australian Open also shared the pictures of the three together. However, what caught the attention of the netizens was the caption which read. “Three legends, one photo 🤩@imVkohli x @rogerfederer x @AnushkaSharma #AusOpen.”Anushka Sharma and Her 'Beautiful Sunny Boy' Virat Kohli Enjoy Sunny Day at Australian Open 2019 (See Pics).

No sooner the netizens noticed the same, they trolled Australian Open for labelling Anushka as a legend. The netizens commented on the snap and said if Anushka’s name could be taken in the same breath with the two sporting icons. Check out the post below. Virat Kohli and Anushka Sharma Meet Roger Federer, Watch Serena Williams and Novak Djokovic in Action at Australian Open 2019 (See Day 6 Pics).

Here are a few comments below.

This netizen cropped the picture and pointed out a couple of legends.

fixed it, since you said " Legends ".

Here’s another jibe at the Australian Open.

This Internet user is having a meltdown.

Having a meltdown because it says "3 legends" is incredibly sad. Get it together people.

The Intenet user asked who the third legend was.

Who is the third legend? You forgot to put his/her picture.