Earlier, it was David Warner’s 166 that helped Australia pile up such a huge total on board, 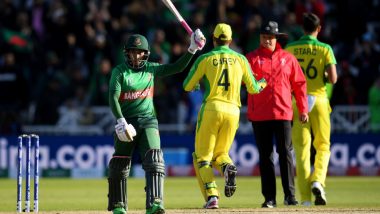 Chasing such a huge target Bangladesh did well to keep Australia on their toes. Apart from Mushfiqur, Tamim Iqbal and Mahmudullah scored 62 and 69 respectively. Bangladesh’s batting mainstay in this World Cup managed run-a-ball 41.

The Tigers lost opener Soumya Sarkar early in the fourth over after a direct hit by Aaron Finch from mid-on caught him short of the crease at the non-striker’s end. Tamim and Shakib, two of Bangladesh’s senior-most batsmen, took their side forward with a 79-run stand for the second wicket. Australia vs Bangladesh Highlights And Cricket Score - 26th ODI match - Full Scorecard.

Bangladesh then lost Tamim and Liton Das before Mushfiqur and Mahmudullah added 127 runs for the fifth wicket. The partnership kept Bangladesh in the hunt and at times it appeared the Tigers might take to very close. However, after Mahmudullah’s dismissal, Bangladesh’s hopes dashed away. Mushfiqur went on to score an unbeaten century as Bangladesh fell short of the target. Australia vs Bangladesh Highlights And Cricket Score - 26th ODI match - Full Scorecard.

# 381 is Australia's third-highest total in ODIs.

# David Warner becomes the first batsman to notch two scores of 150-plus in World Cups.

# Shakib Al Hasan becomes the first Bangladeshi player to score 400 runs in a series/tournament in any format.

# Tamim Iqbal is now involved in 27 run outs in ODIs.

Earlier, it was David Warner’s 166 that helped Australia pile up such a huge total on board. The left-hander scored 166 runs off 147 balls, the highest score by a batsman in this World Cup thus far. Apart from him, Usman Khawaja scored 89 off 72 balls. Australia’s skipper Aaron Finch also scored 53.

(The above story first appeared on LatestLY on Jun 21, 2019 12:13 AM IST. For more news and updates on politics, world, sports, entertainment and lifestyle, log on to our website latestly.com).