The win was instrumented by a memorable three-wicket haul by Shaheen Shah Afridi (3/31) and later, skipper Babar Azam and Mohammad Rizwan did not have any trouble in chasing down the 152-run total with 13 balls to spare. With this win, Pakistan broke India's winning streak of 12-0 against them in World Cup matches (both 50 Overs and T20 World Cups). 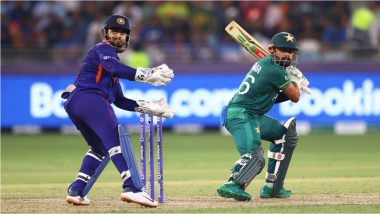 Finally, the wait is over. After losing 12 straight matches to India in World Cups, Pakistan finally have one win under their belt as they defeated Virat Kohli's side comprehensively by 10 wickets in a T20 World Cup 2021 clash in Dubai on October 24, Sunday. And Babar Azam would cement his name in history as being the first Pakistan captain to ever beat end up beating India in a World Cup clash. Many other big names have tried to achieve this in the past. Names like Misbah Ul-Haq, Shahid Afridi, Waqar Younis--all have tried and have failed and finally, it is Babar Azam, who has achieved this unique, historic and memorable feat to be remembered in Pakistan's cricketing folklore forever. Virat Kohli and Babar Azam’s Pics Go Viral As Captain's Embrace Each Other During India vs Pakistan T20 World Cup 2021 Fixture (See Photos)

Many perhaps did not believe Azam when he said that in his opinion, Pakistan would defeat India. And well, Pakistan lived up to that word by word with a clinical performance against India at the Dubai International Stadium. Having won the toss, they opted to bowl first and young paceman Shaheen Shah Afridi rattled the Indian batting line-up with two wickets of Rohit Sharma and KL Rahul. Indian captain Virat Kohli did what he does best--perform on the biggest occasions and he struck a hard-fought 57 off 49 balls to steer his side to 151/7, that was not enough for the chase that was to follow.

Pakistan, opening the innings with skipper Azam and wicketkeeper-batsman Mohammad Rizwad put up a clinical, exemplary batting performance, stitching an unbeaten 152-run opening stand to put to bed the chase in just 17.5 overs. Azam struck 68 runs off just 52 balls while Rizwan top-scored with 79 runs off just 55 deliveries to help Pakistan make history on a Sunday night in Dubai. A big win right at the start of the tournament would surely give Pakistan a world of confidence as they further head into the competition while India would need to lift themselves up after a poor performance. The pain and agony of missing out even after coming close to a win, now is a thing of the past and this win would surely soothe some of the past painful losses Pakistan have had against India in World Cups.

(The above story first appeared on LatestLY on Oct 24, 2021 11:19 PM IST. For more news and updates on politics, world, sports, entertainment and lifestyle, log on to our website latestly.com).