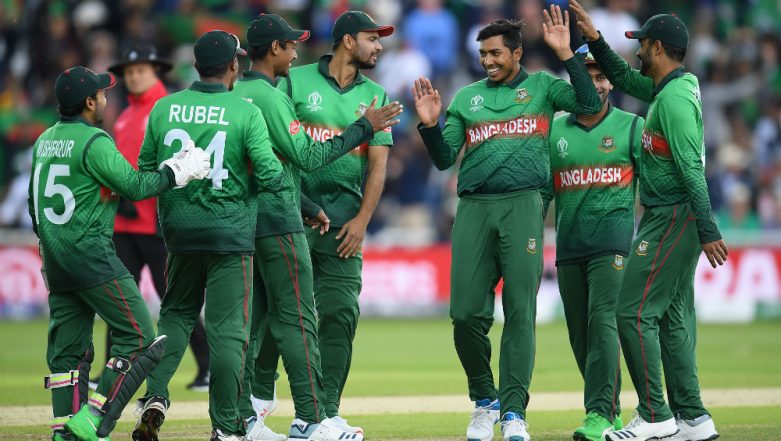 Birmingham, July 2: Coming into the tournament as darkhorses, Bangladesh have impressed all with their consistent display in this edition of the World Cup. While fans now wait with bated breath to watch them take on India in a must-win game at the Edgbaston Cricket Ground on Tuesday, for the Bangladesh Cricket Board (BCB) the display in the tournament is a just reward for the constant support that it has given to the likes of Mashrafe Mortaza, Shakib Al Hasan and Mustafizur Rahman among others. India vs Bangladesh Dream11 Team Predictions: Best Picks for All-Rounders, Batsmen, Bowlers & Wicket-Keepers for IND vs BAN in ICC Cricket World Cup 2019 Match 40.

And now, it is all about creating a solid base and bench strength in Bangladesh's junior circuit to ensure that when these stalwarts walk into sunset, the team doesn't hit the transition button for long. For BCB, the future is just as important as the present and that is the very reason why they are looking to take a leaf out of the books of none other than the Board of Control for Cricket in India (BCCI). IND vs BAN, ICC Cricket World Cup 2019: Jasprit Bumrah vs Tamim Iqbal and Other Exciting Mini Battles to Watch Out for at Edgbaston Cricket Ground.

Speaking to IANS, a senior BCB official said that the board is looking to focus on investing at the grassroots level to bring in quality youngsters into the national set-up and improve the bench strength just like the BCCI has done by getting the likes of Rahul Dravid to monitor the whole of junior circuit as well as the players plying their trade in the 'A' team.

"The idea is to be prepared for tomorrow. To be honest, you don't get players like Mortaza or Shakib or Tamim Iqbal everyday. When these guys hang their boots, the team should be in a position wherein there are enough players waiting on the bench to carry the mantle forward.

"These are big boots to fill, but it is important to start now so that the phase of transition isn't a long one. Yes, it will be an issue to start with, but there should be enough recognized talent who have the game to shine at the top level. Look at how India have a whole system in place where Dravid keeps an eye on the progress of the young turks and the end result is a huge pool of resources to pick from," the official said.

Elaborating further, the official said that the idea is to expose the young players to match situations so that they can build a strong sense of adaptability. "The U-19 team is coming to England to play in a tri-series against India and England. This apart, we are looking at our emerging team going to India and participating in the Karnataka State Cricket Association's local tournament.

"This Bangladesh team has quite a few quality players and replacing them won't be easy. But we must start now to reap the rewards when they finally do make the move," the official said. While they are fierce competitors on the field, Bangladesh cricket is clearly looking to model itself on the BCCI and produce future players who will dominate world cricket.