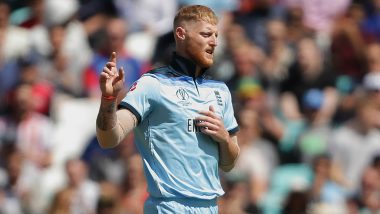 The cricketer, however, has turned down the nomination and instead has nominated Black Caps captain Kane Williamson for the award. Stokes took to Facebook and shared his thoughts in a post. Kumar Dharmasena Refutes James Anderson’s Claim That Ben Stokes Asked Umpire Not to Add Four Overthrows to England Total During CWC 2019 Final.

The all-rounder added that his life is established in the United Kingdom. “I have helped England lift a World Cup and my life is firmly established in the UK – it has been since I was 12-years old.” ICC Cricket World Cup 2019 Final Was Both Best & Worst Day of My Life, Says Martin Guptill.

Stokes was all praises Williamson and felt he is the worthy recipient of the New Zealander of the year award. “I feel the whole country should align their support to New Zealand captain Kane Williamson. He should be revered as a kiwi legend. He led his team in this World Cup with distinction and honour. He was the player of the tournament and an inspirational leader of men. He shows humility and empathy to every situation and is an all-round good bloke. He typifies what it is to be a New Zealander. He would be a worthy recipient of this accolade. New Zealand, fully support him. He deserves it and gets my vote,” the all-rounder wrote.

(The above story first appeared on LatestLY on Jul 23, 2019 04:20 PM IST. For more news and updates on politics, world, sports, entertainment and lifestyle, log on to our website latestly.com).