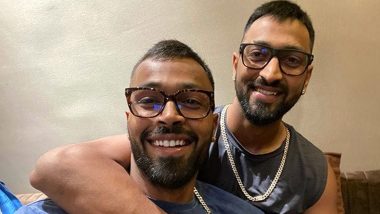 Just like many other cricketers all around the world, India all-rounder Hardik Pandya must also be raring to showcase his on-field blitzes again. However, no one can deny the fact that Hardik is also enjoying a gala family time. Soon to be a father, the swashbuckling batsman took to his official Instagram account and shared a picture with brother and fellow all-rounder Krunal Pandya. In the snap, the Pandya brothers can be seen sporting the same sort of glasses. Through the caption, Hardik also revealed that he is blessed to get an elder brother like Krunal. Hardik Pandya Shares Adorable Pictures With Fiancee Natasa Stankovic on Instagram, Says ‘Happiness in Life.’

“Blessed with the best #Twinning #PandyaBrothers,” wrote the three-time IPL winner while sharing the snap on the picture-sharing website. Well, everyone is well aware of the camaraderie shared between the two brothers and Hardik’s latest Instagram post was another proof of the fact. Many photos and videos of the Pandya brothers came out during the lockdown in which they can be seen involved in various fun activities. Meanwhile, let’s look at Hardik’s latest Instagram pic.

Blessed with the best 🤓 #Twinning #PandyaBrothers

Meanwhile, Hardik is all set to be a father as few weeks ago, he announced the pregnancy of his better half Natasha Stankovic. Ever since then, he is taking full care of his partner. Recently, Hardik gifted Natasha a beautiful flower bouquet.

Talking about the return of Indian cricket team onto the field, BCCI is reportedly planning to organize the national side’s practice session at the National Cricket Academy (NCA) in Bengaluru. However, the likes of skipper Virat Kohli and deputies Rohit Sharma and Ajinkya Rahane are likely to remain stranded at their Mumbai home as their area comes under the most affected region of India.

(The above story first appeared on LatestLY on Jun 20, 2020 03:44 PM IST. For more news and updates on politics, world, sports, entertainment and lifestyle, log on to our website latestly.com).