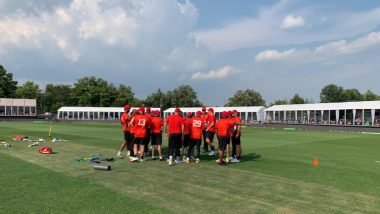 The start of Montreal Tigers vs Winnipeg Hawks Global T20 Canada 2019 cricket match on Friday in Brampton was delayed due to a bomb threat. Initially, it was reported that the match was delayed due to some technical issues. However, according to ESPNcricinfo report, the entry to the CAA centre stadium was restricted after an unattended package was found by the police. Yuvraj Singh Smashes Pakistan Bowler Shadab Khan for a Flat Six During Global T20 Canada Match, Watch Video.

Interestingly, Global T20 Canada’s Twitter handle cited technical reasons for the delay. “Match has been delayed due to some technical reason. We’ll get back to you shortly with an update,” tweeted GT20 Canada.

While the official Twitter handle mentioned technical reasons, the broadcaster of the T20 league cited "security issues" for the delay. The match was eventually started after a 90-minute delay and was reduced to 12 overs per side.

Match has been delayed due to some technical reason. We’ll get back to you shortly with an update. #GT2019 #MTvsWH

As per the report, the players were not allowed to enter the ground. "Routine sniffer dogs checks found a substance that alerted security," one player was quoted as saying by ESPNcricinfo. Global T20 Canada 2019 Schedule: Full Time Table With Fixtures, Dates, Match Timings in IST and Venue Details of GT20 League.

Later as the match began, one of the commentators revealed that the "security situation" was the reason for the delay. The commentator, however, chose not to elaborate.

Montreal Tigers eventually won the match after posting 135 for three in 12 overs. Sunil Narins scored 59 off just 30 balls to set the tone for victory. Winnipeg Hawks in their 12 overs managed 11 for five despite Umar Akmal’s 30-ball 49.

(The above story first appeared on LatestLY on Jul 28, 2019 10:57 PM IST. For more news and updates on politics, world, sports, entertainment and lifestyle, log on to our website latestly.com).