COVID-19 Break Could Add a Year or Two to My Career, Says England Pacer James Anderson 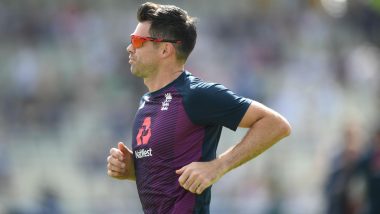 London, June 2: Veteran England pacer James Anderson believes the enforced break in cricket due to COVID-19 pandemic could prolong his career by an year or two.

All cricketing activities across the world have been suspended since mid-March due to the outbreak of novel coronavirus, which has so far claimed more than 3.75 lakh lives globally.

"It could just add on a year or two at the end of my career," Anderson said while speaking on BBC's Tailenders podcast.

"I've really enjoyed being back and as odd as it is just bowling into a net, with not many people around, it's still nice to be back and playing cricket."

Anderson, 37, is part of the 55-member group that has been asked to return to training, ahead of the West Indies Test series.

Last week, Anderson had posted a video of himself on Instagram in which he was seen running in and then delivering the ball at the Old Trafford.

"I bring all the kit myself - my bands and med balls to warm-up with - and I've got my own cricket balls which I don't normally have," said Anderson who is England's leading wicket-taker in Test cricket and One-Day Internationals.

"I have a quick lap round the outfield and then straight into the nets. I bowl a few overs and then get straight back in the car and go home."

The Test series against West Indies will take place behind closed doors and Anderson supports the idea of playing artificial crowd noise at the games.

"I've been watching the rugby league in Australia and I actually thought there was a crowd watching because they were playing crowd noise through the speaker in the stadium," Anderson said.

"I actually thought it worked. It was nice to have that sort of atmosphere even though there was no-one there," he added.

Earlier, former England batsman Kevin Pietersen had also said that the "forced break" might have helped certain athletes to increase the length of their careers.

"I wonder how many sportsmen/women have had their careers lengthened with this forced break? Little niggles healing. A mental break from pressure. Falling back in love with their sport. Would be interesting to find out?" Pietersen had tweeted.

(The above story first appeared on LatestLY on Jun 02, 2020 01:21 PM IST. For more news and updates on politics, world, sports, entertainment and lifestyle, log on to our website latestly.com).