Cricket Flashback: When David Warner Made His International Debut for Australia Against South Africa in Melbourne (Watch Video)

What made Warner’s debut special was that he had no experience of playing first-class cricket and was straightaway trusted to do the job in the international circuit. And boy, the gutsy left-hander delivered in style. 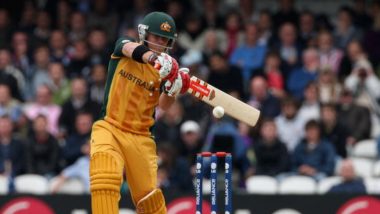 In January 2009, a 22-year-old David Warner was handed his international debut for Australia. The left-handed batsman was picked for T20I series against visiting South Africa at the Melbourne Cricket Ground (MCG). What made Warner’s debut special was that he had no experience of playing first-class cricket and was straightaway trusted to do the job in the international circuit. And boy, the gutsy left-hander delivered in style to score 89 off just 43 balls. After Australia opted to bat first, Warner survived some close calls in the opening over. He would have been run-out for one had AB de Villiers hit the stumps directly and then in the same over, Warner hit Makhaya Ntini over mid-on to pick his first boundary by just beating the fielder, who was attempting a catch. David Warner Workout, Diet and Fitness: How the Australian Opening Batsman Manages to Keep Himself in the Shipshape.

Nonetheless, Warner showed why he was picked in the team as he started smashing South African bowlers all around the park. Warner lost his opening partner Shaun Marsh in the fourth over, but that did not bog down the left-hander. He then combined with captain Ricky Ponting as the duo added 59 runs for the second wicket.

During the partnership, Warner completed his half-century off just 19 balls, including four sixes. It was the second-fastest fifty in T20Is at that time. He continued his dominance against the likes of Ntini, Dale Steyn and Jacques Kallis. Warner was then dismissed in the 14th over and missed out on his century by just 11 runs. Had he reached the three-figure mark, it would have been only the second century in T20Is back then. During his stay, Warner slammed seven fours and six sixes. David Warner Exasperated Over Aaron Finch’s Predicted Exclusion From Australia’s Playing XI for ICC Cricket World Cup 2023.

Australia eventually posted 182 for nine in their 20 overs and then restricted South Africa to 130 in 18 overs, winning the match by 52 runs. In the second and last T20I, Australia emerged victors by six wickets to clinch the series. Warner, however, managed only seven runs. The left-hander was a week later handed ODI debut against the same opponents. In 2011, he made his Test debut against New Zealand at Brisbane.

(The above story first appeared on LatestLY on Mar 29, 2020 01:03 PM IST. For more news and updates on politics, world, sports, entertainment and lifestyle, log on to our website latestly.com).