Virat Kohli and Rohit Sharma ended the year as the top two highest run-scorers in One Day internationals in 2019 while Pakistan newbie Abid Ali scored a fantastic 174 against Sri Lanka in the 2nd Test match. Kuldeep Yadav scripted history as he took his second hat-trick in ODIs meanwhile, Rohit Sharma also scored the highest individual score in the 50-over format in 2019. 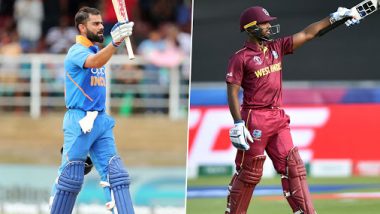 Team India ended 2019 on a high as they ended the year with yet another series win over a resurgent West Indian side. Virat Kohli finished the calendar year with the most runs in ODI internationals while explosive Indian opener Rohit Sharma surpassed yet another milestone as he broke the 22-year old record of Sri Lankan legend Sanath Jayasuriya of scoring most runs as an opener in a calendar year. In the longest format of the game, Pakistan locked horns with Sri Lanka in the second Test match of the series. The first game was curtailed due to rains but Pakistan look favourite’s to clinch the series on the last day of the match. Here are five of the best performances in cricket from the last week. Virat Kohli Surpasses Jacques Kallis to Become Seventh Highest Run-Scorer in ODIs, Achieves Feat During India vs West Indies 3rd ODI 2019.

In the shortest format of the game, the 2020 IPL Player Auction was held which say the franchises go all out to get the required players for their team. Pat Cummins was the most expensive player to under the hammer as the Australian pacer was bought for a whopping INR 15.5 crore by Kolkata Knight Riders, which made him the second most expensive buy-in IPL history. Fellow Australian Glenn Maxwell and Nathan Coulter-Nile also made big bucks as they were sold to KXIP and MI for INR 10.75 crore and INR 8.5 crore respectively. Rohit Sharma Breaks Record of Scoring Most Runs as Opener in a Calendar Year, Achieves Feat During IND vs WI 3rd ODI 2019.

Another chase for team India, another occasion when Virat Kohli takes his side over the line. The Indian captain was instrumental as he guided his side to a win in the 3rd ODI against West Indies and clinch the series 2-1. He played a fantastic inning of 85 runs with a strike rate of over 100 which included nine fours.

The West Indian came to bat during a difficult period for his team and took them to a commanding total in the 3rd ODI. He stitched up a partnership of 135 runs with Kieron Pollard to take his team to a commanding score. The left-handed batsmen smashed Indian bowlers all across the park as he scored 89 off just 64 deliveries which included 10 fours and three sixes.

The Indian opener was just too good for the West Indian bowling attack in the 2nd ODI of the series. Rohit Sharma scored a fabulous 159 off 138 deliveries and in doing that made the highest score by an individual in ODIs in 2019. His innings included 17 fours and five massive sixes.

The Indian spinner made history as he took his second hat-trick in one-day internationals in the 2nd ODI against West Indies. Kuldeep Yadav dismissed Shai Hope, Jason Holder and Alzarri Joseph in consecutive deliveries to achieve this feat.

The Pakistani batsman was instrumental in the second Test against Sri Lana to out his side in a commanding position. The right0handed batsman struggled in his first innings as he was dismissed for a well-fought 28 but showed all his class in the second innings as he dominated the Lankan bowling and scored fantastic 174

Australia’s premier T20 cricketing competition, Big Bash league kicked-off on December 17 and it saw some fantastic performances over the week. New Mumbai Indians player Chris Lynn was at his destructive best in Sunday’s clash against the Sixers as the Australian smashed a 35 ball 94 to help his side to a comfortable win.

(The above story first appeared on LatestLY on Dec 23, 2019 09:12 AM IST. For more news and updates on politics, world, sports, entertainment and lifestyle, log on to our website latestly.com).