CSK still have the likes of Imran Tahir, Faf du Plessis and Shane Watson in their line up while Quinton de Kock, Keiron Pollard and Lasith Malinga are there with the Mumbai Indians. 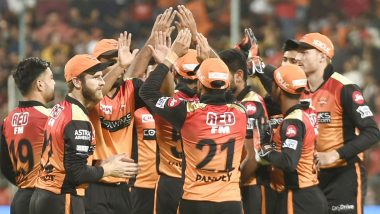 New Delhi, May 6: The ongoing edition of the Indian Premier League (IPL) has reached it business end. The top four teams have been decided and it will be Mumbai Indians, Chennai Super Kings, Delhi Capitals and Sunrisers Hyderabad who will be fighting for the coveted trophy over the next one week. With the World Cup approaching, many of the foreign players were called by their respective national sides just before the playoffs to take part in training camps and gear up for the showpiece event which begins from May 30 in England and Wales. Indian Premier League 2019 – Points Table.

Almost all the teams suffered after their international players returned. However, of the four teams that have qualified for the playoffs, SRH have been the one who have felt the absence of their marquee foreign players the most.

David Warner, who returned to competitive cricket after a year ban, amassed 692 runs at a magnificent average of almost 70, including eight fifties and a century in the 12 matches he played in this IPL edition. Jonny Bairstow was also phenomenal with the bat as he scored 445 runs in the 10 matches he played. The duo scored bulk of the runs for SRH and once they left, the team had been in total disarray.

Although, their bowling seems to be in control with Bhuvneshwar Kumar, Sandeep Sharma, Rashid Khan and Mohammed Nabi, it is their batting which has lost them most of their games in the ongoing season. The Hyderabad-based franchise lost their final two encounters in the league stage and it was only after KKR's loss to Mumbai Indians that SRH -- with only 12 points -- could qualify for the playoffs. Delhi Capitals vs Sunrisers Hyderabad Live Cricket Score Eliminator T20 Match.

On the other hand, all the other three qualifiers haven't lost many of their foreign internationals. Also, the other factor which goes in favour of CSK, DC and MI is the performance of their Indian players.

These teams, unlike SRH, have made it to the last four not only by banking on their foreign internationals. Their young Indian players have also come to the party and have made noticeable contributions with both bat and ball.

CSK still have the likes of Imran Tahir, Faf du Plessis and Shane Watson in their line up while Quinton de Kock, Keiron Pollard and Lasith Malinga are there with the Mumbai Indians. Delhi Capitals will, however, miss the services of Kagiso Rabada -- the Purple Cap holder -- who has returned back to South Africa due to injury. IPL 2019 Weekly Recap Before Playoffs Begin: SRH First Team to Qualify With 12 Points, CSK Maintain 100% Qualification Record & More!.

Thus, it would be a herculean task for Kane Williamson to instill confidence in his team. Williamson knows in the absence of Warner and Bairstow, he alongside Martin Guptill, Manish Pandey and Vijay Shankar, will have to score runs if SRH are to beat Delhi Capitals in the Eliminator to be played on Wednesday.

(The above story first appeared on LatestLY on May 06, 2019 02:43 PM IST. For more news and updates on politics, world, sports, entertainment and lifestyle, log on to our website latestly.com).